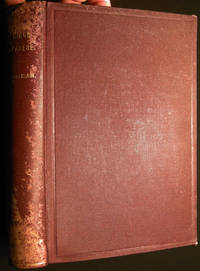 Things Japanese Being Notes on Various Subjects Connected with Japan

Things Japanese Being Notes on Various Subjects Connected with Japan

London: Kegan Paul, Trench, Trubner & Co., Ltd. Et al , 1890. ii + 408 + (1) page advertising books by B.H. Chamberlain + (1) page Japanese copyright page at back. With a color folding map of Japan in Provinces, inset map of Yezo & the Kurile Islands; approx. 17 3/4" x 19 1/2" size. Alphabetically organized and with a useful index, the author candidly notes in the Introduction, "...Old Japan is dead, and the only decent thing to do with the corpse is to bury it. Then you can set up a monument over it, and, if you like, come and worship from time to time at the grave; for that would be quite "Japanesey." This little book is intended to be, as it were, the epitaph recording the many and extraordinary virtues of the deceased, - his virtues, but also his frailties. For, more careful of fact than the generality of epitaphists, we have ventured to speak out our whole mind on almost every subject, and to call things by their names, being persuaded that true appreciation is always critical as well as kindly..." Basil Hall Chamberlain, [called Odo] (1850-1935) British-born Japanologist "...one of the rare European intellectuals of real stature who devoted the best part of their lives to the study of Japan... his remarkable command of Japanese, coupled with his kindly, tolerant, democratic personality, enabled him to establish a wonderful rapport, not only with intellectuals but also with common people of Japan, such as his servants. He also visited almost every prefectureHis solid knowledge and appreciation of Japan has tended to be underestimated because of the impression, more apparent than real, that he was Eurocentric. It is true that he candidly criticized some aspects of Japan, but awareness of the existence of more than one legitimate point of view made him free from any rigid Eurocentrism. His unpublished letters reveal that his attachment to Japan had an intensity hitherto unsuspected..." (Yuzo Ota in the ODNB) Title page with the small previous ownership stamp of George R. Brush M.D. U.S. Navy on the title page; he served as a surgeon & medical inspector, from 1861-1894 and was often on-station in Japan and other Asian locations in pursuit of his naval duties; also, handwritten identifier on the front endpaper: "George R. Brush. U.S. flagship Omaha Nagasaki Japan 18th June 1890." Volume approx. 5 3/4" x 8" size; wine-red cloth binding, gilt spine titles. Some edge, tips wear to binding, mottled loss of color to the spine cloth; map and contents in very good condition.. First Edition. Hard Cover. Good.

Seller rating:
This seller has earned a 4 of 5 Stars rating from Biblio customers.
Biblio.com member since 2009
Bolivia, North Carolina
Ask Seller a Question

Certain Books, ABAA is located in Westhampton, New York, sales via the internet. We are full-time dealers in antiquarian books, maps, photographs, prints, paper ephemera and works of art, specializing in historical manuscript collections, business archives, and with a sub-specialty in Long Island historical material. Institutional inquiries are always welcome and we are pleased to offer our appraisal services and collection-building expertise. There are thousands of items presently catalogued in the Certain Books website, many of which are one-of-a-kind. Please enjoy browsing our site or use the advanced search feature when looking for a specific item -- we always input keywords as we catalogue and important aspects of our books are noted, whether they are first editions, association copies or possess something of particular collecting interest. We actively exhibit at antiquarian book & ephemera shows in the American Northeast and we buy & sell on the Internet, as well as producing occasional catalogues and lists of our materials. We are members of the Antiquarian Booksellers Association of America and the International League of Antiquarian Booksellers, the Ephemera Society of America and the Bibliographical Society of America.Please let us know if we may be of help and we'll be happy to oblige- George Krzyminski, Proprietor of Certain Books, ABAA

title page
A page at the front of a book which may contain the title of the book, any subtitles, the authors, contributors, editors, the... [More]
Cloth
"Cloth-bound" generally refers to a hardcover book with cloth covering the outside of the book covers. The cloth is stretched... [More]
gilt
The decorative application of gold or gold coloring to a portion of a book on the spine, edges of the text block, or an inlay in... [More]
spine
The outer portion of a book which covers the actual binding. The spine usually faces outward when a book is placed on a shelf.... [More]
First Edition
In book collecting, the first edition is the earliest published form of a book. A book may have more than one first edition in... [More]
Copyright page
The page in a book that describes the lineage of that book, typically including the book's author, publisher, date of... [More]