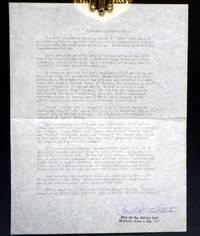 A Signed Statement on the Last Minute Preparations For the Enola Gay signed by Paul W. Tibbets Written shortly after the dropping of the Atomic Bomb about the Last Minute Preparations made on August 5, 1945. Typical of Tibbets typing were strikeovers and occasional misspellings. He notes that the clouds over Japan were breaking up, the lettering on the nose of the plain which the painter took less than half an hour to complete on the Enola Gay and the loading of the bomb. He gathered the so-called Tinian "joint chiefs" including himself, General Thomas F. Farrell, the Manhattan Project's key ranking officer, Admiral William R. Purnell, Navy Captain William S. "Deak" Parsons, who would be the chief weaponer on the flight: Commander Frederick L. Ashworth, another weaponer, Professor Norman F. Ramsey, who I first met in General [Uzal] Ent's office and Professor Robet Brode. General Farrell sent a message in code to General Groves who in turn passed the word of our scheduled 2:45 A.M. takeoff time to General Marshall. The tension in the Pentagon must have equaled that on Tinian. In the messages that flew back and forth across the Pacific during our period of preparation, there were code names for everything. I was "Yoke", Deak was "Judge", General Farrell was "scale", and General LeMay was "Cannon". The recent atomic test in New Mexico was called "Trinity", atom was "Top", atomic was "Topic" and uranium fission was "Urchin Fashion". At this morning's meetings, Captain Parsons startled us all by expressing concern over our plans to take off with a live atomic explosive in the bomb bay. In the few days since he had arrived on the island, he had witnessed a number of fiery crashes as overloaded B-29's failed to become airborne. Four crashes had occurred the night before with thunderous explosions of bombs, torpedoes, and incendiaries that lit up the sky and cost the lives of all crewman aboard. Deak Parson, who knew just about all there was to know about the workings of our bomb, having participated in its development, was blunt and convincing as he spoke of risks. [note: this is why at the last minute Deak Parsons persuaded it should be done in spite of the close quarters] "If we crack up and the plane catches fire," he said, "there is danger of an atomic explosion that could wife [sic wipe] out half of this island."/Paul W. Tibbets/ [stamped in black] Pilot of the Enola Gay/Hiroshima, Japan 6 Aug. 1945.

Seller rating:
This seller has earned a 5 of 5 Stars rating from Biblio customers.
Biblio.com member since 2006
Scottsdale, Arizona
Ask Seller a Question