Join us June 2–June 4, 2022 for our second virtual antiquarian book fair!
Preregister now for Biblio.live and get $10 to use at the fair.
Home Bookmarc Books The Tomorrow-Tamer 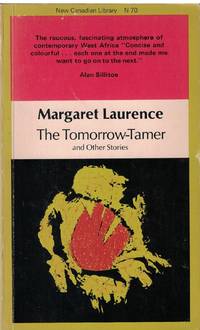 Full refund including shipping charges for up to 30 days after delivery if an item arrives misdescribed or damaged.�

We are a small independent, carbon neutral bookroom located in Campbell River, BC. Open to the public by appointment, we specialize in Horror, Science Fiction, Fantasy & Weird Fiction. Throw in some Occult options and we think we've got a nice assortment, but by all means have a look for yourself. Need more info or a scan, just let us know.If you are a local or are visiting the Campbell River area, you can always pick your book up in person...at an agreed upon time, please. We also feature Free Local Delivery!

spine
The outer portion of a book which covers the actual binding. The spine usually faces outward when a book is placed on a shelf.... [More]
12mo
A duodecimo is a book approximately 7 by 4.5 inches in size, or similar in size to a contemporary mass market paperback. Also... [More]
jacket
Sometimes used as another term for dust jacket, a protective and often decorative wrapper, usually made of paper which wraps... [More]
Mass Market
Mass market paperback books, or MMPBs, are printed for large audiences cheaply. This means that they are smaller, usually 4... [More]
reprint
Any printing of a book which follows the original edition. By definition, a reprint is not a first edition.
New
A new book is a book previously not circulated to a buyer. Although a new book is typically free of any faults or defects, "new"... [More]

More books like this are on sale from Bookmarc Books at 10% off!