Home Calix Books Topographical, Moral, & Physiological;) Made in a… 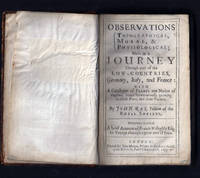 Topographical, Moral, & Physiological;) Made in a Journey Through Part of the Low-Countries, Germany, Italy, and France: with A Catalogue of Plants not Native of England, found Spontaneously growing in those Parts, and their Virtues by John Ray, Fellow of the Royal Soc.

Topographical, Moral, & Physiological;) Made in a Journey Through Part of the Low-Countries, Germany, Italy, and France: with A Catalogue of Plants not Native of England, found Spontaneously growing in those Parts, and their Virtues by John Ray, Fellow of the Royal Soc.: Along with:Exteris Regionibus A nobis Observatarum, Quae vel non omnino vel parce admodum in Anglia Sponte proveniut

London: printed for John Martyn, 1673. 8vo, (xvi), 499, (1); (viii), 115 pp., separate title to second part, engraved portrait and three plates (two folding), contemporary calf, ends of spine worn. The rare book is boxed in a cloth green paper box for protection; from the library of George & Laura Gifford and earlier library of William Gilstrap, a very clean and nice copy. Complete with plates in excellent condition. John Ray spent three years touring the Continent with his Cambridge contemporary, Francis Willughby, and others, primarily with a view to composing a systematic account of European natural history. They traveled through the Low Countries, Germany, and Italy, France, and Switzerland, with Ray making short visits to Sicily and Malta, and Willughby making a separate excursion to Spain.

Included are observations on local customs and antiquities, and a systematic catalogue of European plants. Wing R399. Today, the organic origin of fossils isn't even a matter of debate, but this wasn't always the case. As science historian Martin J.S. Rudwick has pointed out, fossils used to be defined as anything dug up or found lying on the ground. While fossils included some clearly organic remains, other so-called fossils were crystals, and in between was a whole range of fossils that were much harder to identify.

John Ray was possibly the best naturalist of the 17th century, and he went to his grave unable to convince himself one way or the other about the origin of fossils. He considered the possibility that some fossils belonged to life forms that no longer existed, but suggesting extinction was tricky business in his time due to theological beliefs.

Ray may be admired as much for the theories he rejected as the theories he proposed. One supposition of his time was that fossils were the seeds of organisms that simply never sprang to life, but this just didn't strike Ray as logical. Why would mere seeds look so much like the real thing? Likewise, he rejected the notion that fossils embedded in mountains had been placed there by the biblical flood. He recognized that floodwaters covering the entire planet would require the sudden appearance and subsequent disappearance of a tremendous amount of water, and this didn't fit with what he understood of natural law.

In his studies, Ray developed an ingenious method of examining fossils. At the end of the day, he would build a fire on the beach, pile the rocks he found in the flames, then pull them out with a pair of tongs and plunge them into the water. Sometimes the fossils cracked, but usually, this process would neatly separate the fossil from the surrounding rock.

What is most interesting is Ray's discovery of plants from other parts of the world that were to be found in Britain (this is why he came up with the theory of plant classification, cleverly skirting the theological precepts of his day). This idea eventually superseded the belief amongst scientist/scholars/philosophers of the times and leading right up to Darwin in 1849 on publication of his "origin of the species", that God created plants and animals and they were there because that is where they were placed in the creation of the world. Clearly, Ray believed that not to be the case. Ray's assertion or even the mentioning of 'species' was a risky business; as were his positions on fossils and his beliefs were for a clergy/scientist or naturalist to take during his life time and some would argue, heretical.

Ray's biographer, Charles Raven, commented that "Ray sweeps away the litter of mythology and fable... and always insists upon accuracy of observation and description and the testing of every new discovery". Ray's works were directly influential on the development of taxonomy by Carl Linnaeus.

The Ray Society, named after John Ray, was founded in 1844. It is a scientific text publication society and registered charity, based at the Natural History Museum, London, which exists to publish books on natural history, with particular (but not exclusive) reference to the flora and fauna of the British Isles. As of 2017, the Society had published 179 volumes.

The John Ray Society (a separate organisation) is the Natural Sciences Society at St Catharine's College, Cambridge. It organises a programme of events of interest to science students in the college.

In 1986, to mark the 300th anniversary of the publication of Ray's Historia Plantarum, there was a celebration of Ray's legacy in Braintree, Essex. A "John Ray Gallery" was opened in the Braintree Museum.

calf
Calf or calf hide is a common form of leather binding.  Calf binding is naturally a light brown but there are ways to treat...[more]
cracked
In reference to a hinge or a book's binding, means that the glue which holds the opposing leaves has allowed them to separate,...[more]
Cloth
"Cloth-bound" generally refers to a hardcover book with cloth covering the outside of the book covers. The cloth is stretched...[more]
spine
The outer portion of a book which covers the actual binding. The spine usually faces outward when a book is placed on a shelf....[more]
New
A new book is a book previously not circulated to a buyer. Although a new book is typically free of any faults or defects,...[more]