Home Books of the World Traces of India: Photography, Architecture, and the… 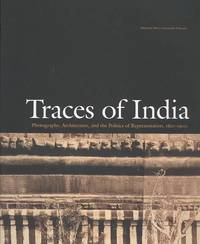 Traces of India: Photography, Architecture, and the Politics of Representation, 1850-1900

Traces of India: Photography, Architecture, and the Politics of Representation, 1850-1900

Traces of India depicts the social, political, and anthropological role that photographs of Indian architecture played in the late 19th century, laying the historical foundations—real and imagined—on which an ordered empire might be constructed. The book explores some of the great architectural sites of the Indian subcontinent from Mughal, Jain, and Sikh monuments in the north to Hindu temples of South Asia and Buddhist monuments in central India through a selection of 19th century photographs along with a selection of images from popular culture, such as postcards, posters, political ephemera, calendar art, clips of Bollywood films, and religious imagery. The book includes such masterpieces as Felice Beato's views of the Taj Mahal, the Golden Temple, and monuments in the city of Lucknow, John Murray's three-plate panorama of the 17th century Pearl Mosque in the Agra fort, and a 21-plate panorama by Linnaeus Tripe recording an inscription that runs along the base of the 11th century Rajarajesvara temple. Beyond the apparent purposes of these images as picturesque views or records of an architectural past, deeper considerations influenced the way the image makers worked, selecting, framing, composing, and populating their representations of these monuments. These images remain enduring records of their makers' minds. This book is an investigation of that deeper visual culture, showing us how 'simple' images of buildings are in fact complex artifacts of the cultural and political forces shaping colonial India. The dozen contributors to the book, from post-colonial theorists to museum curators, examine the connections between photography and architecture through the visual culture of colonialism.

This publication accompanied an exhibition of the same name, held in 2003-2004 at the Canadian Center for Architecture and the Yale Center for British Art. It won the Alcuin Society Award for Excellence in Book Design in Canada, category Prose Non-Fiction Illustrated, and the Historians of British Art Book Prize, category multi-authored/edited volume. Illustrated with 183 photographs, many rare or little known, the book offers an appealing and fresh view of colonial images as seen through postcolonial eyes. The volume also includes an extensive bibliography of literature of 19th century photography in South Asia.

New
A new book is a book previously not circulated to a buyer. Although a new book is typically free of any faults or defects,...[more]
tight
Used to mean that the binding of a book has not been overly loosened by frequent use.
spine
The outer portion of a book which covers the actual binding. The spine usually faces outward when a book is placed on a shelf....[more]
First Edition
In book collecting, the first edition is the earliest published form of a book. A book may have more than one first edition in...[more]
fine
A book in fine condition exhibits no flaws. A fine condition book closely approaches As New condition, but may lack the...[more]
jacket
Sometimes used as another term for dust jacket, a protective and often decorative wrapper, usually made of paper which wraps...[more]

More books like this are on sale from Books of the World at 30% off!