Shop Now
Home The Manhattan Rare Book Company The Tragedy of Hamlet Prince of Denmark. As it is now… 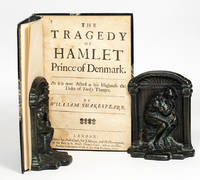 The Tragedy of Hamlet Prince of Denmark. As it is now Acted at his Highness the Duke of York's Theatre

The Tragedy of Hamlet Prince of Denmark. As it is now Acted at his Highness the Duke of York's Theatre

London: Andr. Clark, for J. Martyn, and H. Herringman, 1676. Sixth edition. Morocco. Very Good. THE SCARCE 1676 "PLAYERS' QUARTO" AND FIRST DAVENANT EDITION. THE A. EDWARD NEWTON COPY. FIRST PRINTING, WITH FOUR-LINE IMPRINT. The 1676 "Players' Quarto" is the sixth overall quarto printing of Hamlet (Q6) and the first printing since the Restoration. It is the first edition to list the players (including two women, who in the Restoration were allowed to appear on the stage for the first time) and the first edition to divide the play into acts. Also, known as the first Davenant edition, the text was edited and prepared by William Davenant, "the man mainly responsible for the return of Shakespeare's plays to the London stage at the Restoration" (DNB). Q6 is particularly significant for our understanding of how Shakespeare was received during the Restoration, for the whole text is included, but with indications of which lines were omitted during performances. "As has been pointed out, 'Davenant's importance as a champion of continuity can hardly be overestimated. When he came to direct Shakespeare plays and adaptations at his own theatre in Lincoln's Inn Field, he stood at the centre of the transmission of acting traditions going back to Elizabethan days.' It may then by of considerable interest that we have specific information about Davenant's Restoration abridgement of Shakespeare's Hamlet. The tragedy was among the few plays that were not 'improved'... Hamlet remained Hamlet, both in performance and in print... "Davenant's version survives in the players' quarto of 1676, which provided what no other earlier quarto had done before: the original authorial and the then current theatrical text. According to the title page, the play was printed 'as it is now acted at His Highness the Duke of York's Theatre.' Between the title page and the beginning of the text, a note in large print, taking up an entire page, reads: To the Reader, This Play being too long to be conveniently Acted, such places as might be least prejudicial to the Plot or Sense, are left out upon the Stage: but that we may no way wrong the incomparable Author, are here inserted according to the Original Copy with this Mark " "Peter Holland has commented that the above address 'is a complex and resonant one. It marks one step in the opening of an explicit gap between text and performance in the representation of the text'... While earlier publications had generally claimed to render a dramatic text either  according to the original copy or as it has been performed, the present quarto is the first one that shows an awareness of the discrepancy between authorial and performance texts and attempts to record both" (Lukas Erne, Shakespeare as Literary Dramatist). Provenance: The A. Edward Newton copy, with his classic bookplate on the front pastedown. A. Edward Newton was one of America's legendary book collectors and book enthusiasts. After his death in 1940, much of his library was auctioned by Parke-Bernet Galleries in New York, in 1941. This volume is listed as Lot 192 in the action catalog for his sale ("Part III"), October 29, 30, 1941. Note: There are two printings with 1676 on the title page. According to Greg, this is the first printing, with the four-line imprint. Another printing dated 1676 has a five-line imprint; Greg proposes that the five-line imprint was issued "some years later". London: printed by Andr. Clark, for J. Martyn, and H. Herringman, 1676. Quarto (148 x 206mm) nineteenth-century three-quarter blue levant morocco by Root; elaborately gilt-decorated spine, marbled boards, marbled endpapers, all edges gilt. Upper joint tender. Repaired closed tears to title page with rear reinforcement near the gutter and inner margin of imprint. "To the Reader" with repaired closed tear and small reinforcement near gutter. Some early pages closely cropped, affecting head-lines. AN EXTREMELY SCARCE AND IMPORTANT EDITION OF ARGUABLY SHAKESPEARE'S GREATEST WORK.

New
A new book is a book previously not circulated to a buyer. Although a new book is typically free of any faults or defects,...[more]
bookplate
Highly sought after by some collectors, a book plate is an inscribed or decorative device that identifies the owner, or former...[more]
quarto
The term quarto is used to describe a page or book size. A printed sheet is made with four pages of text on each side, and the...[more]
title page
A page at the front of a book which may contain the title of the book, any subtitles, the authors, contributors, editors, the...[more]
gutter
The inside margin of a book, connecting the pages to the joints near the binding.
spine
The outer portion of a book which covers the actual binding. The spine usually faces outward when a book is placed on a shelf....[more]
morocco
Morocco is a style of leather book binding that is usually made with goatskin, as it is durable and easy to dye. (see also...[more]
gilt
The decorative application of gold or gold coloring to a portion of a book on the spine, edges of the text block, or an inlay in...[more]
First Edition
In book collecting, the first edition is the earliest published form of a book. A book may have more than one first edition in...[more]
edges
The collective of the top, fore and bottom edges of the text block of the book, being that part of the edges of the pages of a...[more]
Marbled boards
...[more]