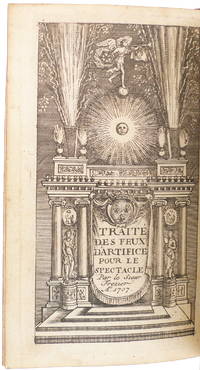 Divided into three parts it subsequently treats the ingredients of fireworks, the production of various types of fireworks, and finally fireworks displays. Frezier "was an all-round military expert and fortified San Domingo and other places. His book describes coloured fires, Roman candles, set pieces, fireworks burning under water, etc. and is particularly detailed on rockets, incl. those of repeated flight [...], i.e. the prototype of the modern stratosphere rockets and also military rockets containing devices which caused them to rotate in flight" (Partington).

spine
The outer portion of a book which covers the actual binding. The spine usually faces outward when a book is placed on a shelf....[more]
paste-down
The paste-down is the portion of the endpaper that is glued to the inner boards of a hardback book. The paste-down forms an...[more]
edges
The collective of the top, fore and bottom edges of the text block of the book, being that part of the edges of the pages of a...[more]
calf
Calf or calf hide is a common form of leather binding.  Calf binding is naturally a light brown but there are ways to treat...[more]
bookplate
Highly sought after by some collectors, a book plate is an inscribed or decorative device that identifies the owner, or former...[more]