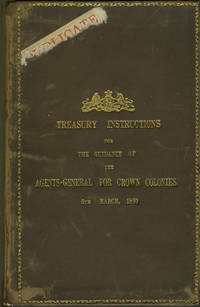 Treasury Instructions for the Guidance of the Agents-General for Crown Colonies, 5th March, 1860

Treasury Instructions for the Guidance of the Agents-General for Crown Colonies, 5th March, 1860

London: Printed by W. Mitchener, 1860. Hardcover. Very good overall. Instructions from the Commissioners of Audits approved by Queen Victoria's Commissioners of the Treasury which were provided to the Agents General of British colonies. Among the "Supplies" procured and forwarded to the colonies are included "Sub-Marine Telegraph Cables, Steam Vessels, Dredging Vessels" showing a keen involvement with advancing telegraph capabilities after the successful launching of the first telegraphic cable across the Atlantic by the Great Eastern in 1858. The instructions include two types of colonies, "Crown" and "Representative", seemingly related to the application of the instructions which are "Strictly Applied" in Crown Colonies and "Applied when Practicable" in Representative Colonies. The Crown Colonies include many islands of the Caribbean - Bermuda, Jamaica, Grenada, St. Lucia, Bahamas, Turks Islands and Trinidad. Bermuda is unusually listed "Convict Service only (partly representative). Other Crown colonies are Ceylon, Mauritius, Western Australia (the only Australian state so designated), Gibraltar, Malta, Natal, Labuan, Sierra Leone, Gambia, Gold Coast, Hong Kong, British Guiana, British Columbia, British Kaffraria, St. Helena, Falkland Islands, Heligoland. Representative colonies include Victoria, Tasmania and New Zealand, Cape of Good Hope, New Brunswick, Newfoundland, Vancouver's Island and St. Kitts. Also included are lists of supplies to be procured and forwarded, and incidental duties. 8vo, 24pp. Brown gilt calf presentation binding, with gold gilt title, border and royal crest. Deaccessed from the Foreign & Commonwealth Office Library, with their stamp at the front end paper. Rubbed at spine, paper "Duplicate" label partially present at front cover, title page detached. Binding slightly separated but firm. Trove cites digital copies only. OCLC: 276298293 cites 2 copies, at the Archives of Canada and Auckland Libraries.

Seller rating:
This seller has earned a 2 of 5 Stars rating from Biblio customers.
Biblio.com member since 2009
Garrison, New York
Ask Seller a Question

spine
The outer portion of a book which covers the actual binding. The spine usually faces outward when a book is placed on a shelf.... [More]
gilt
The decorative application of gold or gold coloring to a portion of a book on the spine, edges of the text block, or an inlay in... [More]
calf
Calf or calf hide is a common form of leather binding. Calf binding is naturally a light brown but there are ways to treat the... [More]
New
A new book is a book previously not circulated to a buyer. Although a new book is typically free of any faults or defects,... [More]
title page
A page at the front of a book which may contain the title of the book, any subtitles, the authors, contributors, editors, the... [More]