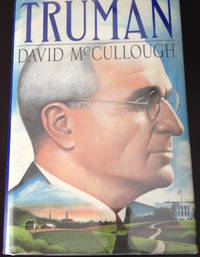 Simon & Schuster, NY/NY, 1992. Hardcover. Fine/Fine. "It was the watershed time of the century and Truman stands forth now - especially now in the aftermath of the Cold War - as a figure of utmost importance. He is the President responsible for the Truman Doctrine, the Marshall Plan, NATO, the amazing Berlin Airlift. It was Truman who first recognized Israel, who established the Defense Department, started the CIA, who decided to proceed with the hydrogen bomb. He sent the first civil rights message... to Congress and desegregated the armed forces. [He] decided to intervene in Korea, and who, when he fired General McArthur, upheld the principle of civilian control over the militrary. [He was] more thoughtful, kind, complex, and far more touched by emotion than commonly appreciated - and, too, 'tough as a boot" [Peter Ackroyd, Dust Jacket] The definitive biography. Owner name. There is a protective mylar cover. 1ST EDITION, LATER PRINTING

The life of Harry S. Truman is one of the greatest of American stories, filled with vivid characters -- Roosevelt, Churchill, Stalin, Eleanor Roosevelt, Bess Wallace Truman, George Marshall, Joe McCarthy, and Dean Acheson -- and dramatic events. In this riveting biography, acclaimed historian David McCullough not only captures the man -- a more complex, informed, and determined man than ever before imagined -- but also the turbulent times in which he rose, boldly, to meet unprecedented challenges. The last president to serve as a living link between the nineteenth and the twentieth centuries, Truman's story spans the raw world of the Missouri frontier, World War I, the powerful Pendergast machine of Kansas City, the legendary Whistle-Stop Campaign of 1948, and the decisions to drop the atomic bomb, confront Stalin at Potsdam, send troops to Korea, and fire General MacArthur. Drawing on newly discovered archival material and extensive interviews with Truman's own family, friends, and Washington colleagues, McCullough tells the deeply moving story of the seemingly ordinary "man from Missouri" who was perhaps the most courageous president in our history.

Seller rating:
This seller has earned a 5 of 5 Stars rating from Biblio customers.
Biblio.com member since: 2013
Denver, Colorado
Ask Seller a Question