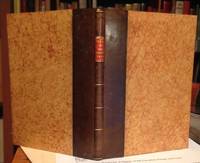 London. 1662. First Edition. Hardcover. Title page continues: "Together with what he intended to have spoken the day of his sentence (June 11) for arrest of judgment, (had he not been interrupted and over-ruled by the court) and his bill of exception. With other occasional speeches, &c. Also his speech and prayer, &c. on the scaffold." pp (3)-(135). 19.5 cm. Modern quarter calf and patterned boards, spine with red label and gilt rules, by Pride's Crossing Bindery. Title page has an 1834 ink name in upper corner and a crease to lower inner corner; text paper a little yellowed; a couple small dark spots to pp 101-04; a few small dark spots to last leaf; near fine, text clean and unworn, externally fine. >>> Sir Henry Vane the younger, a devout Puritan, emigrated to Massachusetts in 1635, and was elected Governor in 1636. An advocate of religious tolerance, his single term as Governor was not a successful one - he engaged the colony in war with the Pequots, for one thing - but he was instrumental in the founding of Harvard College and he was also a supporter of Roger Williams and the foundation of Rhode Island. Sir Harry returned to England in 1637, now more radical and anti-clerical, becoming a member of the Short and Long Parliaments, and advocating for the separation of church and state. After the fall of Cromwell and the Restoration, Vane was granted clemency for his part in the Glorious Revolution, but it was overturned. He stood trial for high treason, and as was the custom of the time, was forced to defend himself without benefit of counsel. The court was packed with Royalists and he was convicted and subsequently beheaded on Tower Hill. Samuel Pepys was present and wrote "He made a long speech, many times interrupted by the Sheriff and others there; and they would have taken his paper out of his hand, but he would not let it go. But they caused all the books of those that writ after him to be given the Sheriff; and the trumpets were brought under the scaffold that he might not be heard. Then he prayed, and so fitted himself, and received the blow; but the scaffold was so crowded that we could not see it done....He had a blister, or issue, upon his neck, which he desired them not hurt: he changed not his colour or speech to the last, but died justifying himself and the cause he had stood for; and spoke very confidently of his being presently at the right hand of Christ; and in all things appeared the most resolved man that ever died in that manner, and showed more of heat than cowardize, but yet with all humility and gravity. One asked him why he did not pray for the King. He answered, 'Nay,' says he, 'you shall see I can pray for the King: I pray God bless him !" Lowndes says "THE TRYAL was written by a Sectarist in favor of Vane and printed by stealth." Sir Henry's views on the ultimate power of the governed over the governors were the crux of the thinking which lead to the Declaration of Independence in the American colonies. Sabin 98500. ESTC R21850. Wing T2216. Lowndes, p. 2753. DAB XIX, pp 191-93. The only edition. Rare. ; Small quarto .

For direct orders, prices will be converted to equivalent Canadian dollars at the prevailing rate of exchange on day of order and shipping is extra at cost. For shipments to a Canadian address, HST is extra (5% on book price, provincial rate on shipping). We accept payment by Visa, Mastercard, American Express, international money order, cheque (Canada and US only). For credit card orders, the US dollar total will be converted to Canadian dollars at the prevailing daily rate. All items are guaranteed to be as described and authentic, and any item may be returned for a full cash refund including cost of return shipping (post office only) if it is felt to be not as described. Returns for any other reason accepted only with our express permission. Persons wishing to return an item for whatever reason should in any case contact us first and within 7 days of receipt. All items remain our property until paid for in full. Books can be sent with invoice to major institutions.

Seller rating:
This seller has earned a 5 of 5 Stars rating from Biblio customers.
Biblio.com member since 2004
WELLAND, Ontario
Ask Seller a Question

gilt
The decorative application of gold or gold coloring to a portion of a book on the spine, edges of the text block, or an inlay in... [More]
fine
A book in fine condition exhibits no flaws. A fine condition book closely approaches As New condition, but may lack the... [More]
calf
Calf or calf hide is a common form of leather binding. Calf binding is naturally a light brown but there are ways to treat the... [More]
title page
A page at the front of a book which may contain the title of the book, any subtitles, the authors, contributors, editors, the... [More]
First Edition
In book collecting, the first edition is the earliest published form of a book. A book may have more than one first edition in... [More]
quarto
The term quarto is used to describe a page or book size. A printed sheet is made with four pages of text on each side, and the... [More]
spine
The outer portion of a book which covers the actual binding. The spine usually faces outward when a book is placed on a shelf.... [More]