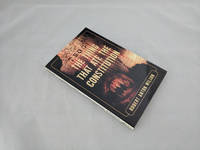 TSOG: The Thing That Ate The Constitution

What is TSOG? It's the "Tsarist Occupational Government", those wonderful folks in Washington B.C. (oops, sorry, that's D.C.) who, OF COURSE, always have your best interest at heart. Of course.

TSOG is Bob's most powerful political statement. What is happening in the United States--RIGHT NOW!--to human freedom and to the Constitution that was written to secure and protect YOUR liberty? Why does the U.S. have a drug TSAR(!) who proudly destroys millions of lives and bullies the governments of the rest of the world into prosecuting an insane war on [some] drugs? How did a Nazi spy come to have an enormous influence on current U.S. foreign policy? Will the 'war on terrorism' put the last nail in the coffin of YOUR rights? Would Hannibal Lecter make a better president than George W. Bush?

Bob's keen wit skewers those who are forcing us all into slavery, and warns us that there is little time left. How long will it be before Bob's books are banned as 'literary terrorism'?

"About this title" may belong to another edition of this title

Seller rating:
This seller has earned a 5 of 5 Stars rating from Biblio customers.
Biblio.com member since: 2018
Palm Springs, California
Ask Seller a Question