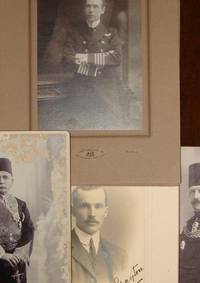 Cairo Photographic Image. Very Good. No Binding. The photographs are a part of Naum Shoucair's collection has been published (except tow un known photographs in this collection) in his book, Tarikh Sina al Qadim wa al Hadith wa Jografiyyatuha, The history of Sinai and Arabs. Al Ma'arif press, Cairo 1916, inventory no. 000456. 11 photographs are mounted on cards (not included in the measurements mentioned) of which four are signed. (1) Sir Lee Stack Pasha, royal secretary to the Sudanese government and former director of the intelligence agent and one other (un known and un published), both signed in 1913. 21.5 x 14 cm. (2) Colone G. F. Clayton, director of the intelligence agency and rep. of the Sudanese government, signed. Photogrpah by Hughes & Mullins, Ryde. 15 x 10.5 cm. (3) Captain A W Weymouth commander of Minerva, signed. 15 x 10 cm. Photo by Symonds & Co. Portsmouth (4) Rudolph Slatin Pasha, signed in 24-6-1895. Photo by Zangaki, Cairo. 22.5 x 16.5 cm. (5) Lord Kitchener. 27 x 17 cm. (6) Beamish bey, former governor of the Sinai. Photo. Lekegian, Cairo. 14 x 9.5 cm. (7) Captain Phipps Hornby vommander of Diana. Photo. Russell & Sons, southsea. 14.5 x 10 cm. (8) A. C. Parker governor of Sinai. Photo. H. Walter. Barnett, India- London. 13 x 9 cm. (9) Liutenant W. E. J. Bramly director, inspector of Sinai. Photo Lekegian, Cairo. 10 x 10 cm. (10) Lord Edward Cecil, chancelor of the exchequer Egypt and former director of the intelligence/ information agency. Un mounted. 20 x 14 cm. (11) Un known and un published. 22 x 16 cm. (12) Un known and un published. Photo. P. Dittrich successor to J. Heyman, Cairo. 18.5 x 13 cm. Naum Shoucair (1863-1919), intelligence officer and historian, was educated at Beirut university and in 1886 came to Egypt where he joined the Intelligence Department of the Egyptian Army. In 1900 he was transferred to the Sudan Government and was appointed Director of the Historical Section. He served under Lord Kitchener and Sir Reginald Wingate and assisted in the arrangements for the escape of Slatin Pasha from Omdurman in 1895, for which he was decorated by the Emperor Francis Joseph. He became a well known expert on Sinai and due to his intimate knowledge he was sent to Sinai in 1905 on several important missions, accompanying Captain Phipps-Hornby of HMS Diana on a mission to Akaba in 1906 and later he served as a member of the Sinai Boundary Commission. Shoucair wrote his History of the Sudan in 1903, History of Sinai in 1916, and at the time of his death was completing a history of Arabia. 0.

G
Good describes the average used and worn book that has all pages or leaves present. Any defects must be noted. (as defined...[more]