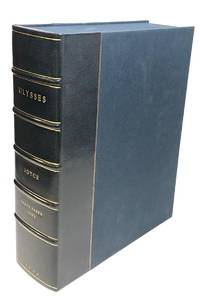 Paris: Shakespeare & Co, 1922. Limited. paperback. very good(-). Thick large 8vo, original blue wrappers printed in white. Paris: Shakespeare & Co., 1922. First edition. From a total printing of 1000, this is one of only 150 large paper copies on verge d'Arches, measuring 10.375 x 8.9375 inches. Housed in a blue half morocco clam-shell case. A large, uncut copy in original wrappers (blue paper is entirely lacking from the spine and with small chips at the joints; faint discoloration on copyright and limitation pages from old paper once laid in; a handful of other pages with brownish spatter). Number 174 of 1000 numbered copies. Although the series of 750 were numbered 251- 1000 they were actually printed first. The series of 100 was done next, and the large format run last. Because of the larger format the printer had to reimpose the forms, which gave Joyce the opportunity to correct one typo, "borad" to "board" on p. 31, l. 10. S & C. A17.

All items are offered net, subject to prior sale. Returns accepted within 7 days of receipt--please contact us first. Payment by Visa , Mastercard & American Express. Appropriate sales tax will be added for all N.Y. State residents

We are a large retail store, with 6 floors of out-of-print and rare books, (including, Americana, modern first editions, history of medicine and science), antique maps and prints, autograph manuscripts, letters & signatures.

wrappers
The paper covering on the outside of a paperback.  Also see the entry for pictorial wraps, color illustrated coverings for...[more]
First Edition
In book collecting, the first edition is the earliest published form of a book. A book may have more than one first edition in...[more]
morocco
Morocco is a style of leather book binding that is usually made with goatskin, as it is durable and easy to dye. (see also...[more]
spine
The outer portion of a book which covers the actual binding. The spine usually faces outward when a book is placed on a shelf....[more]