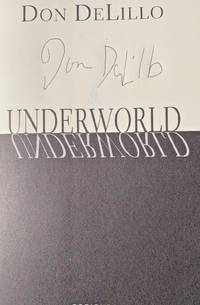 HARDCOVER. SIGNED in Person at the Book Signing Event. UNDERWORLD by Don DeLillo (1997). SIGNED to the Full Title page by Don Delillo, the author. Brand New and Never owned. This is a First Edition, Sixth Printing copy as stated on the copyright page. Dust jacket is in Brand New condition with no issues. Book has no tears, marks, creases, remainder marks, library markings, or black lines on the edges. Not inscribed to anyone. Not price-clipped, not a Book Club Edition (BCE), or signed on a bookplate. True Collectible Quality. First Edition, Sixth Printing, hand SIGNED to the Full Title page. No inscription; full signature only. From an event featuring Don DeLillo in New York City on September 24, 2007. FREE: The complete six-page program from the New York's 92Y Reading Series event showing Don Delillo's appearance on September 24th, 2007 are included. Any book that I ship that has a Dust jacket will be protected by a New, Clear, Removable Acid-Free Cover. This book will be carefully wrapped and shipped with free delivery confirmation. Don DeLillo's novels include End Zone, Great Jones Street, Ratner's Star, Amazons, Point Omega, Players, Running Dog, The Names, The Body Artist, Cosmopolis, Americana, Mao II, Libra, Underworld, and White Noise, and three plays: The Day Room, Valparaiso, and Love-Lies Bleeding. His next novel, The Silence, will be published October 20, 2020. He has won the National Book Award, the PEN/Faulkner Award for Fiction, the PEN/Saul Bellow Award for Achievement in American Fiction, and the Jerusalem Prize. In 2006, Underworld was named one of the three best novels of the last 25 years by The New York Times Book Review, and in 2000 it won the William Dean Howells Medal of the American Academy of Arts and Letters for the most distinguished work of fiction of the past five years. Underworld was published on October 3, 1997. ISBN: 978-0684-8426-91. BS13690.

Copyright page
The page in a book that describes the lineage of that book, typically including the book's author, publisher, date of...[more]
jacket
Sometimes used as another term for dust jacket, a protective and often decorative wrapper, usually made of paper which wraps...[more]
bookplate
Highly sought after by some collectors, a book plate is an inscribed or decorative device that identifies the owner, or former...[more]
inscribed
When a book is described as being inscribed, it indicates that a short note written by the author or a previous owner has...[more]
First Edition
In book collecting, the first edition is the earliest published form of a book. A book may have more than one first edition in...[more]
New
A new book is a book previously not circulated to a buyer. Although a new book is typically free of any faults or defects,...[more]
title page
A page at the front of a book which may contain the title of the book, any subtitles, the authors, contributors, editors, the...[more]
edges
The collective of the top, fore and bottom edges of the text block of the book, being that part of the edges of the pages of a...[more]
book club edition
A generic term denoting a book which was produced or distributed by one of any number of book club organizations. Usually the...[more]
remainder
Book(s) which are sold at a very deep discount to alleviate publisher overstock. Often, though not always, they have a remainder...[more]