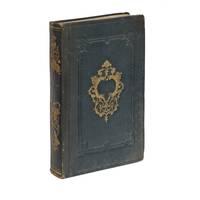 [Istanbul]: Ibrahim Sa'ib, 1243 AH (1828 CE). First edition. 8vo (22 x 16 cm), pp.[1, blank], 3, [1, blank], 4, [2, blank], 259, [1, blank]. Printed Ottoman Turkish, with printed text frames, marginalia, and ornamental headpiece. A very good copy bound in late 19th-century Ottoman cloth, stamped in gilt and blind, a little rubbed. The earliest comprehensive account of Sultan Mahmud II's savage repression of the Janissaries in 1826, composed by the court historian and scholar Mehmed Es'ad Efendi (1789-1848). Mahmud II (1785-1839) sought to reform the Ottoman state, but found the entrenched Janissary Corps a constant obstacle to his plans. In 1826, he announced their dissolution, and the formation of a new modern army, which provoked a mutiny by the janissaries. The sultan had anticipated this, and moved swiftly to crush the mutineers. By the end of 1826, Sultan Mahmud II had killed or exiled the vast majority of janissaries within his empire and prohibited the Bektashi Sufi order, closely associated with the janissaries, whose adherents were exiled. This is the first significant account of a year in which the Ottoman state was transformed.

Cloth
"Cloth-bound" generally refers to a hardcover book with cloth covering the outside of the book covers. The cloth is stretched...[more]
gilt
The decorative application of gold or gold coloring to a portion of a book on the spine, edges of the text block, or an inlay in...[more]
marginalia
Marginalia, in brief, are notes written in the margins, or beside the text of a book by a previous owner.  This is very...[more]
New
A new book is a book previously not circulated to a buyer. Although a new book is typically free of any faults or defects,...[more]
First Edition
In book collecting, the first edition is the earliest published form of a book. A book may have more than one first edition in...[more]