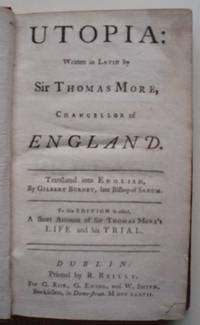 Utopia: written in Latin by Sir Thomas More, Chancellor of England. Translated into English by Gilbert Burnet, late Bishop of Sarum. To this edition is added, a short account of Sir Thomas More’s life and his trial

Utopia: written in Latin by Sir Thomas More, Chancellor of England. Translated into English by Gilbert Burnet, late Bishop of Sarum. To this edition is added, a short account of Sir Thomas More’s life and his trial

Thomas More's Utopia is a work of satire, indirectly criticizing Europe's political corruption and religious hypocrisy. In Utopia the Utopians have eliminated wealth, the nobility, private property, and currency. Labour and goods are distributed equally. Property is held in common. Everyone works the same hours and even though the rulers are exempt from public labour, they work to set a good example for the others. Work hours are equally distributed and there are no monasteries, convents, alehouses, or academies wherein an individual might withdraw from the rest of society. All Utopians are socially productive.

It was to have a lasting impact on subsequent political thought and literature. It has inspired a diverse group of political thinkers from Jeremy Bentham and the Utilitarians to Karl Marx and communism.

Utopiawas first published in Louvain in 1516 in latin; it was translated into English by Raphe Robinson and first published in English in 1551. A more commonly known English translation of the text is that of Gilbert Burnet, produced in 1684 and reprinted here in this first Dublin printing. Gilbert Burnet, Bishop of Salisbury, said of Robinson's translation: 'It was once translated into English not long after it was written; and I was once apt to think it might have been done by Sir Thomas More himself: For as it is in the English of his Age, and not unlike his Style; so the Translator has taken a Liberty that seems too great for any but the Author himself, who is Master of his own Book, and so may leave out or alter his Original as he pleases; Which is more than a Translator ought to do, I am sure it is more than I have presumed to do.'

fine
A book in fine condition exhibits no flaws. A fine condition book closely approaches As New condition, but may lack the... [More]
leaves
Very generally, "leaves" refers to the pages of a book, as in the common phrase, "loose-leaf pages." A leaf is a single sheet... [More]
raised band(s)
Raised bands refer to the ridges that protrude slightly from the spine on leather bound books.  The bands are created... [More]
morocco
Morocco is a style of leather book binding that is usually made with goatskin, as it is durable and easy to dye. (see also... [More]
calf
Calf or calf hide is a common form of leather binding.  Calf binding is naturally a light brown but there are ways to treat... [More]
spine
The outer portion of a book which covers the actual binding. The spine usually faces outward when a book is placed on a shelf.... [More]
bookplate
Highly sought after by some collectors, a book plate is an inscribed or decorative device that identifies the owner, or former... [More]
octavo
Another of the terms referring to page or book size, octavo refers to a standard printer's sheet folded four times, producing... [More]
gilt
The decorative application of gold or gold coloring to a portion of a book on the spine, edges of the text block, or an inlay in... [More]