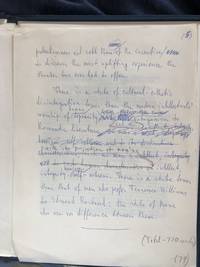 Fine. UNMATCHED Manuscript Ayn Rand! Rarely available, this FINE, heavily edited by Rand, typescript (3p) & Handwritten manuscript (2p) 5 pages, REVEALING THE CORE OF RAND'S AESTHETIC PHILOSOPHY: "AN ACT OF VANDALISM WAS TELEVISED BY NBC ON DEC. 6; THE VICTIM WAS ROSTAND'S 'CYRANO DE BERGERAC.'" Written for Rand's 1962 column in the Los Angeles Times, presented here is her copiously edited manuscript criticizing the "ineptitude displayed by this show," but more importantly providing an early distillation of Rand's entire esthetic philosophy seven years before The Romatic Manifesto was published. Rand devoted a significant number of her columns not to politics or world affairs but to art.

Rand's praise runs from two of history's greatest Romantic writers — Victor Hugo and Edmond Rostand — to the contemporary detective stories of Mickey Spillane. Her condemnation ranges from "most of today's so-called 'serious' writers" to those attacking the popular television show The Untouchables. (Manuscript also available.)

Throughout her insights, Rand stresses the importance of art, the importance of experiencing the concrete projection of values and ideals, to a rational person. Further, she showcases how the field of art serves as a barometer of the philosophic health or disease of a culture. Her additions and deletions are available only here in this manuscript form. Rand's tenure at The Los Angeles Times lasted from June through mid-December 1962. "There is a state lower than that of men who prefer Tennessee Williams to Edmond Rostand: the state of those who see no difference between them." Rand even pens the word count in her own hand! Almost 60 years old, this Ayn Rand manuscript in Library Quality condition is housed in a custom cloth/leather box for protection. Book #C1118. $18,500. The world's largest selection of signed, manuscript, and rare Ayn Rand in private hands!

Pen Ultimate Rare Books carries the largest selection of rare, signed, and manuscript Ayn Rand on the planet! We also carry landmark works of History and Science. And we LOVE English Grammar. Split an infinitive with us!