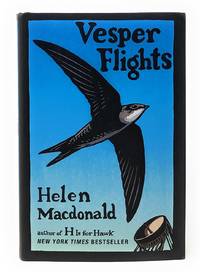 ABOUT VESPER FLIGHTS:
From the New York Times bestselling author of H is for Hawk and winner of the Samuel Johnson Prize for nonfiction, comes a transcendent collection of essays about the natural world.

Animals don't exist in order to teach us things, but that is what they have always done, and most of what they teach us is what we think we know about ourselves.

Helen Macdonald's bestselling debut H is for Hawk brought the astonishing story of her relationship with goshawk Mabel to global critical acclaim and announced Macdonald as one of this century's most important and insightful nature writers. H is for Hawk won the Samuel Johnson Prize for Nonfiction and the Costa Book Award, and was a finalist for the National Book Critics Circle Award and the Kirkus Prize for Nonfiction, launching poet and falconer Macdonald as our preeminent nature essayist, with a semi-regular column in the New York Times Magazine.

In Vesper Flights, Macdonald brings together a collection of her best loved essays, along with new pieces on topics ranging from nostalgia for a vanishing countryside to the tribulations of farming ostriches to her own private vespers while trying to fall asleep.

Meditating on notions of captivity and freedom, immigration and flight, Helen invites us into her most intimate experiences: observing massive migrations of songbirds from the top of the Empire State Building, watching tens of thousands of cranes in Hungary, seeking the last golden orioles in Suffolk's poplar forests. She writes with heart-tugging clarity about wild boar, swifts, mushroom hunting, migraines, the strangeness of birds' nests, and the unexpected guidance and comfort we find when watching wildlife.

By one of this century's most important and insightful nature writers, Vesper Flights is a captivating and foundational book about observation, fascination, time, memory, love and loss and how we make sense of the world around us.

Seller rating:
This seller has earned a 5 of 5 Stars rating from Biblio customers.
Biblio.com member since 2009
Carrollton, Georgia
Ask Seller a Question

fine
A book in fine condition exhibits no flaws. A fine condition book closely approaches As New condition, but may lack the... [More]
bookplate
Highly sought after by some collectors, a book plate is an inscribed or decorative device that identifies the owner, or former... [More]
Cloth
"Cloth-bound" generally refers to a hardcover book with cloth covering the outside of the book covers. The cloth is stretched... [More]
shelfwear
Minor wear resulting from a book being place on, and taken from a bookshelf, especially along the bottom edge.
number line
A series of numbers appearing on the copyright page of a book, where the lowest number generally indicates the printing of that... [More]
jacket
Sometimes used as another term for dust jacket, a protective and often decorative wrapper, usually made of paper which wraps... [More]
spine
The outer portion of a book which covers the actual binding. The spine usually faces outward when a book is placed on a shelf.... [More]
First Edition
In book collecting, the first edition is the earliest published form of a book. A book may have more than one first edition in... [More]