Home B & B Rare Books, Ltd., ABAA The Vicar of Wakefield: A Tale 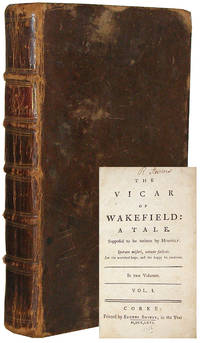 The Vicar of Wakefield: A Tale

The Vicar of Wakefield: A Tale

Corke: Printed for Eugene Swiney, 1766 Pirated Corke edition. Bound in contemporary full brown calf, with five raised bands to the spine, contrasting red calf label to the spine, lettered and decorated in gilt, board edges tooled in blind. Very good, with some wear to the extremities, light rubbing to the boards and spine, minor spotting to the fore edge, former owner's bookplate to the front pastedown, some minor creasing to the otherwise bright pages. Overall, a tight and unsophisticated copy. Housed in a custom quarter morocco red slipcase with a matching chemise. This pirated edition of The Vicar of Wakefield was published in the same year as the first authorized edition that consisted of two volumes printed by R. Collins in London. The pirated Corke edition was also issued in two volumes; in the case of this copy, a previous owner had his binder combine the two parts into a single volume. The Vicar of Wakefield is a Victorian novel that is narrated by Dr. Charles Primrose, the fictional Vicar of Wakefield. Specifically, it follows the Primrose family, humble and moral in spite of its material wealth and indicative of Goldsmith's idealization of pastoral life, after they fall into poverty and subsequent dilemmas as a result, not of their own misdeeds, but of the corrupt and depraved individuals around them. One of the most highly regarded and widely read books of the eighteenth century, The Vicar of Wakefield is mentioned in several notable subsequent publications, including Mary Shelley's Frankenstein (1818), Charlotte Brontë's The Professor (1857), Charles Dickens' A Tale of Two Cities (1859), and George Eliot's Middlemarch (1871-1872), among others.. Hard Cover. Very Good.

"The greatest object in the universe, says a certain philosopher, is a good man struggling with adversity." When Dr Primrose loses his fortune in a disastrous investment, his idyllic life in the country is shattered and he is forced to move with his wife and six children to an impoverished living on the estate of Squire Thornhill. Taking to the road in pursuit of his daughter, who has been seduced by the rakish Squire, the beleaguered Primrose becomes embroiled in a series of misadventures – encountering his long-lost son in a travelling theatre company and even spending time in a debtor’s prison. Yet Primrose, though hampered by his unworldliness and pride, is sustained by his unwavering religious faith. In The Vicar of Wakefield , Goldsmith gently mocks many of the literary conventions of his day – from pastoral and romance to the picaresque – infusing his story of a hapless clergyman with warm humour and amiable social satire. In his introduction, Stephen Coote discusses Goldsmith’s eventful life, the literary devices used in the novel, and its central themes of Christianity, justice and the family. This edition also includes a bibliography and notes.

~ All items are guaranteed as described. We recommend requesting pictures prior to purchasing. ~ Any items may be returned within seven days of receipt and in the same condition as originally sent. ~ We ship with FedEx, UPS and USPS. Please let us know if you prefer another shipping. ~ New York State are required to add 8.875% sales tax.

rubbing
Abrasion or wear to the surface. Usually used in reference to a book's boards or dust-jacket.
calf
Calf or calf hide is a common form of leather binding. Calf binding is naturally a light brown but there are ways to treat the... [More]
raised band(s)
Raised bands refer to the ridges that protrude slightly from the spine on leather bound books. The bands are created in the... [More]
fore edge
The portion of a book that is opposite the spine. That part of a book which faces the wall when shelved in a traditional... [More]
bookplate
Highly sought after by some collectors, a book plate is an inscribed or decorative device that identifies the owner, or former... [More]
tight
Used to mean that the binding of a book has not been overly loosened by frequent use.
gilt
The decorative application of gold or gold coloring to a portion of a book on the spine, edges of the text block, or an inlay in... [More]
edges
The collective of the top, fore and bottom edges of the text block of the book, being that part of the edges of the pages of a... [More]
morocco
Morocco is a style of leather book binding that is usually made with goatskin, as it is durable and easy to dye. (see also... [More]
spine
The outer portion of a book which covers the actual binding. The spine usually faces outward when a book is placed on a shelf.... [More]