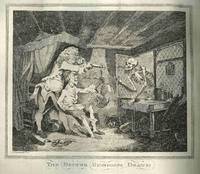 Dublin: Printed by Thomas Walker at Cicero's Head, 1788. 720,[8]pp. plus engraved title and seventy- five engraved plates (including frontis), some folding. Large, thick octavo. Contemporary calf. Bound without wrappers. Year written in ink in an early hand on lower edge, otherwise an excellent copy. The complete volume for the year, comprised of twelve numbers plus the annual appendix. This important Irish monthly was founded in 1771 by James Potts, and Walker assumed control beginning with the March 1774 issue. Publication ceased briefly in April 1785, but resumed again under the new title, WALKER'S HIBERNIAN MAGAZINE, and continued until 1811, the later years under the auspices of Thomas Walker's son, Joseph. During its long run in its different incarnations, THE HIBERNIAN MAGAZINE filled the role of a general Dublin periodical in its coverage of news and politics from Ireland, Britain, Europe and North America, commented on the theatre and new publications, published original poetry and prose, and included marriage, death and business notices. The illustrative material included both serious and satirical subjects, music, and such utilitarian items as patterns for sewing or weaving. Laid in is an a.l.s., "29/7/85," possibly Kingstown, from a collector or bookseller named P. Traymor, to one Geo. Kavanagh, 2pp. on folded octavo lettersheet, extolling the virtues of his set as "the most complete in existence." As one might expect, locations of runs/volumes/individual issues in OCLC and ESTC are spotty, and the reported holdings often imperfect. CRANE AND KAYE 301. ESTC P2405 & P2407. NCBEL II:1379.

calf
Calf or calf hide is a common form of leather binding.  Calf binding is naturally a light brown but there are ways to treat...[more]
New
A new book is a book previously not circulated to a buyer. Although a new book is typically free of any faults or defects,...[more]
octavo
Another of the terms referring to page or book size, octavo refers to a standard printer's sheet folded four times, producing...[more]
wrappers
The paper covering on the outside of a paperback.  Also see the entry for pictorial wraps, color illustrated coverings for...[more]