Home KALAMOS BOOKS Walking the Woods and the Water: In Patrick Leigh Fermor's footsteps from the Hook of Holland to the Golden Horn 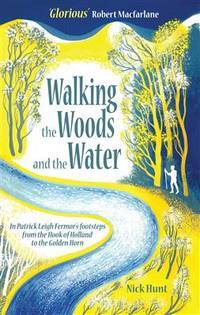 Walking the Woods and the Water: In Patrick Leigh Fermor's footsteps from the Hook of Holland to the Golden Horn

Walking the Woods and the Water: In Patrick Leigh Fermor's footsteps from the Hook of Holland to the Golden Horn

U.S.A.: Nicholas Brealey Publishing, 2014 n 1933, the eighteen year old Patrick Leigh Fermor set out in a pair of hobnailed boots to chance and charm his way across Europe, like a tramp, a pilgrim or a wandering scholar . The books he later wrote about this walk, A Time of Gifts, Between the Woods and the Water, and the posthumous The Broken Road are a half-remembered, half-reimagined journey through cultures now extinct, landscapes irrevocably altered by the traumas of the twentieth century. Aged eighteen, Nick Hunt read A Time of Gifts and dreamed of following in Fermor s footsteps. In 2011 he began his own great trudge - on foot all the way to Istanbul. He walked across Europe through eight countries, following two major rivers and crossing three mountain ranges. Using Fermor s books as his only travel guide, he trekked some 2,500 miles through Holland, Germany, Austria, Slovakia, Hungary, Romania, Bulgaria and Turkey. His aim? To have an old-fashioned adventure. To slow down and linger in a world where we pass by so much, so fast. To discover for himself what remained of hospitality, kindness to strangers, freedom, wildness, adventure, the mysterious, the unknown, the deeper currents of myth and story that still flow beneath Europe s surface.. Softcover. New.

All books are carefully described. If the book you receive does not match,then please contact Kalamos Books, so we can address the problem. We can accept payments (Cash, Cheques, Postal Orders and International Money Orders)in your choice of the following currencies - CAN $, US$, UK Pounds and Euros - enquire for quotes at the current rate of exchange.

Seller rating:
This seller has earned a 5 of 5 Stars rating from Biblio customers.
Biblio.com member since: 2004
STREETSVILLE, Ontario
Ask Seller a Question

Kalamos Books specializes in Books about Greece (Ancient,Byzantine and particularly Modern Greece) and also books about the Balkans & Ottoman Turkey. As well there is a wide selection of Fiction including stories set in Greece, or by Greek authors, as well as historical novels. We can special order books from Greece and handle library purchase orders for books in Greek. In addition we have interesting travel books about other countries, and have some Canadiana and popular fiction.Ask about antique maps and prints and vintage postcards of Greece.