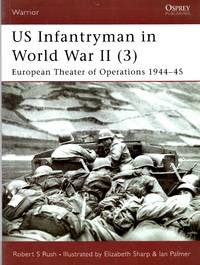 Botley, Oxford, UK: Osprey Publishing, 2002. 64 Pages with Black/White Photos and Colour Plates. The ETO is seen by many as the major theater of World War II, with more infantry regiments serving there than any other. This title follows one soldier ("Joseph") as he is drafted in February 1941, trains with the 22d Infantry in the United States and then ships to England in January 1944. On D-Day he lands on Utah Beach and in the following months fights through France, Belgium, and into Germany. The problems the common soldier faced between June 1944 and May 1945 are dealt with in particular in this authoritative and moving book. . First Edition. Soft Cover. Good/No Jacket.