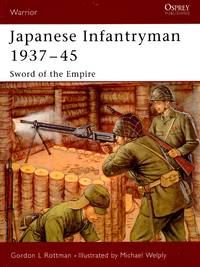 Botley, Oxford, UK: Osprey Publishing, 2005. 64 Pages with Black/White Photos and Colour Plates. This book examines in detail the Japanese Infantryman who was, despite comparisons with the notorious German Waffen SS, an enigma to Westerners. Brutal in its treatment of prisoners as well as the inhabitants of the areas that it conquered, the Imperial Japanese Army also had exacting standards for its own men - strict codes of honor compelled Japanese soldiers to fight to the death against the more technologically advanced Allies. Identifying the ways in which the Japanese soldier differed from his Western counterpart, the author explores concepts such as Bushido, Seppuku, Shiki and Hakko Ichi-u in order to understand what motivated Japanese warriors. . First Edition. Soft Cover. Very Good/No Jacket.