Home > Arundel Books of Seattle > Where the Wild Things Are 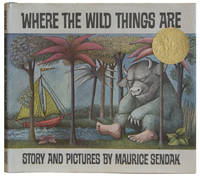 New York: Harper & Row, 1964. Later Printing. Hard Cover. Very Good/Very Good. Sendak, Maurice (illustrator); Over 25 Color Illustrations (including title Page & endpapers). 4to - over 9¾" - 12" Tall (oblong small). Signed by Maurice Sendak on special Pacific Northwest Ballet bookplate on front pastedown (also inscribed "For Bill" in an unknown hand). A nice example of Sendak's signature. This special edition was issued in conjunction with the 1983 production of the ballet version of "The Nutcracker" featuring Sendak's set and costume designs, which production later became the basis of the 1986 film. Classic adventures of Max in the wilds of his imagination; winner of the 1964 Caldecott Medal. With original copyright date of 1963 on title page recto; bound in gray cloth over white color pictorial boards (includes the gold sticker reproduction of the Caldecott Medal on upper cover). Has minor wear, some spotting to jacket. Rear jacket flap notes the book "was reprinted in 1974 from new engravings made from the original art", and 1981 date.

7-day return only if not as described (you must notify us immediately on upon receipt of any problem). We pack carefully.

Seller rating:
This seller has earned a 5 of 5 Stars rating from Biblio customers.
Biblio.com member since: 2005
Seattle, Washington
Ask Seller a Question

About Arundel Books of Seattle

Arundel Books stunning new store is located in Seattle's historic Pioneer Square, and has an eclectic stock that will satisfy both the avid reader and discriminating collector.

title page
A page at the front of a book which may contain the title of the book, any subtitles, the authors, contributors, editors, the...[more]
inscribed
When a book is described as being inscribed, it indicates that a short note written by the author or a previous owner has...[more]
Cloth
"Cloth-bound" generally refers to a hardcover book with cloth covering the outside of the book covers. The cloth is stretched...[more]
bookplate
Highly sought after by some collectors, a book plate is an inscribed or decorative device that identifies the owner, or former...[more]
jacket
Sometimes used as another term for dust jacket, a protective and often decorative wrapper, usually made of paper which wraps...[more]

Home > Arundel Books of Seattle > Where the Wild Things Are