Home Between the Covers- Rare Books, Inc. ABAA The William H. Baldwin Papers: A Collection of… 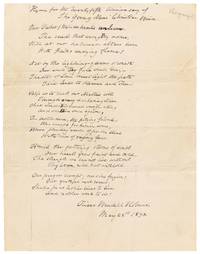 The William H. Baldwin Papers: A Collection of Correspondence of a Boston Philanthropist, including the manuscripts of two rare Oliver Wendell Holmes "A" items

The William H. Baldwin Papers: A Collection of Correspondence of a Boston Philanthropist, including the manuscripts of two rare Oliver Wendell Holmes "A" items

Unbound. A collection of correspondence and family papers of New England abolitionist and philanthropist William H. Baldwin. Included are about 70 Autograph Letters Signed from prominent American literary writers and social reformers including Bronson Alcott, William Cullen Bryant, Ralph Waldo Emerson, William Lloyd Garrison, Julia Ward Howe, John Greenleaf Whittier, Henry Wadsworth Longfellow, and Oliver Wendell Holmes, including the Manuscripts of two of his rare "A" items. Additionally are three letters from U.S. Presidents: Rutherford B. Hayes, Howard Taft, and Calvin Coolidge; and various family papers (spanning the years from 1810-1910) of manuscript, typewritten, and printed materials and photographs, the bulk of which document Baldwin's post-Civil War philanthropic work. Among the later papers are materials relating to Baldwin's two sons: William H. Baldwin, Jr., a noted railroad executive and important benefactor of the Tuskegee Institute; and George S. Baldwin, also a prominent philanthropist and State legislator from Brookline, Massachusetts. Born in Brighton, Massachusetts in 1826, William H. Baldwin established a successful import business of woolen goods in 1850 (Baldwin, Baxter and Company). During the Civil War he was a founding and active member of the Ward 11 Boston Soldiers' Relief Commission which was dedicated to providing relief to the families and soldiers of the Army of the Potomac. After retiring from business in 1868, he became President of the Boston Young Men's Christian Union (YMCU) and devoted the rest of his life to philanthropic work for the YMCU and other Boston-based organizations (these include the Boston School Board, the Children's Mission to the Children of the Destitute, and the American Unitarian Association). The most prolific correspondent is Oliver Wendell Holmes who sent 12 letters to Baldwin between 1869-1890, concerning invitations to speak at special events hosted by the Boston YMCU, praise for Baldwin's many years of service ("you must let me add my name to the list of those who hail you with love and honor"), and other personal matters and related events. The letters are accompanied by the Manuscripts for two Holmes "A" items: "From Dr. Oliver Wendell Holmes," a Typed Manuscript Signed of his tribute to John Greenleaf Whittier upon his death, written at the request of Baldwin (*BAL* 9040); and "Hymn for the Twenty Fifth Anniversary of The Young Mens' Christian Union ... May 28th, 1893," a Manuscript Poem Signed, published as a rare broadside (*BAL* 9048). Other notable correspondence from this archive include three letters from Whittier, six from William Cullen Bryant; and one each from Henry Wadsworth Longfellow, Ralph Waldo Emerson, Edward Everett Hale, and Julia Ward Howe. Among the political figures are four letters from George D. Robinson, the 34th Governor of Massachusetts and a prominent lawyer who secured the acquittal of Lizzie Borden; two from Robert C. Winthrop, and one from William Lloyd Garrison soliciting Baldwin's patronage for William S. Braithwaite, father of the African-American poet William Stanley Braithwaite. The collection also contains various memorial tributes to William H. Baldwin, Jr., including a scarce typescript copy of memorial addresses by Booker T. Washington and Felix Adler from 1905. Additionally the archive contains several autographs from Edwin Booth, Richard Henry Dana, and others, notable Americans. An historically important and compelling archive of a committed abolitionist and philanthropist who remained active throughout his life in the struggle for securing economic freedom and equality for African-Americans. A long and detailed inventory is available upon request.