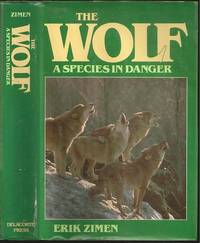 The Wolf, A Species in Danger

The Wolf, A Species in Danger

x+373 pages with color plates, figures, charts, tables, drawings, diagrams, bibliography and index. Royal octavo (9 1/4" x 6") bound in original publisher's quarter green cloth with gilt lettering to spine over beige boards in original pictorial jacket. First edition. Zimen began his inquiry into the genetics of wolf behavior at a former forester station in northern Germany, where he originally intended to study the offspring obtained from crossing wolves and poodles. He soon gave up on the ""puwo"" project and concentrated on comparing wolf and poodle behavior, including poodles to observe the genetic effects of domestication. In this study and later, in the Bavarian forest, he took the cubs and pups soon after birth to prevent their acquiring any learned behavior from their mothers. He kept the species in separate enclosures, though the first adoptee, a female wolf cub, was raised in the Zimens' living room. She became closely attached to him until, sometime after attaining sexual maturity, she turned against him so violently that he had to break off his contacts. This is common, Zimen found, among dominant wolves of both sexes, but especially the female; and would-be wolf owners should take heed. Among the wolves themselves, Zimen reports, dominance battles were fiercest among the females. Contrary to the conclusions of other observers, he comments on the absence of rank order among cubs--though dominance relationships based on size emerge at feeding. Poodle puppies, he reports, show more rank order; they also show more size discrepancy between male and female pups. Among adult wolves, Zimen concludes that dominance relationships are complex and delicate. The mythical autocratic leader does not exist; all members of the pack contribute to decision-making, though not to the same extent. Zimen questions some of Lorenz' assumptions about wolves' expressions of aggression and fear; he examines the workings of the ""selfish gene"" in pack relationships and cub rearing; considers wolf ecology and its effect on prey and the environment; and, in an account of his work on a wolf census in Italy, looks at human behavior toward wolves and the influence of human populations on wolf behavior. A thorough, intelligent, consistently readable, sometimes provocative report--miles ahead of the romantic portrait that has recently prevailed. Condition: Corners bumped, head page ends soiled. Jacket with edge wear else very good in like jacket.

jacket
Sometimes used as another term for dust jacket, a protective and often decorative wrapper, usually made of paper which wraps...[more]
gilt
The decorative application of gold or gold coloring to a portion of a book on the spine, edges of the text block, or an inlay in...[more]
Cloth
"Cloth-bound" generally refers to a hardcover book with cloth covering the outside of the book covers. The cloth is stretched...[more]
spine
The outer portion of a book which covers the actual binding. The spine usually faces outward when a book is placed on a shelf....[more]
First Edition
In book collecting, the first edition is the earliest published form of a book. A book may have more than one first edition in...[more]
octavo
Another of the terms referring to page or book size, octavo refers to a standard printer's sheet folded four times, producing...[more]
soiled
Generally refers to minor discoloration or staining.