Home Books in Bulgaria The Woman in Black 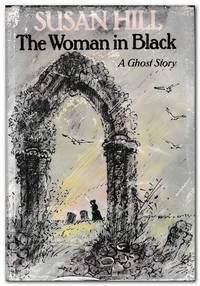 The Woman in Black

The Woman in Black

London: Hamish Hamilton Ltd. Fair in Good dust jacket. 1983. First Edition; First Printing. Paperback. Mass market paperbac . Ex library copy with usual stamps and marks inside. Library binding, missing spine cover and front endpaper, unclipped DJ shows some shelf wear and tear although in clear library sleeve, some internal staing from coffee or tea spilage. ; First edition, first printing with no other printings listed. Dark blue rexine boards. Reading copy only, no names inside. Wrap around DJ artwork and interior ilustrations by John Lawrence. Heavy book and priced accordingly. ; B&W Illustrations; 176 pages; Gothic novel, the thaetrical adaptation being the longest running play in London's West End after Agatha Christie's The Mousetrap. Arthur Kipps, a junior solicitor, is sent to attend the funeral of the sole inhabitant of Eel Marsh House, an isolated house set in coastal marshland, and settle her estate. Whilst there he catches sight of a woman with a pale face and dark eyes dressed all in black, whom a group of children are silently watching... .

Writer, journalist and novelist Susan Elizabeth Hill was born in Scarborough, Yorkshire in 1942. For part of her education she attended a grammar school in Coventry before studying English at King’s College, University London. By then, she had written her first novel, The Enclosure (1961), in the evenings and at weekends, and it was accepted by a publisher while she was in the 6th Form, and published just as she arrived at King's. On gaining her degree in 1963, Susan became book review editor for the Coventry Evening Telegraph . After five years in this post she turned to writing full-time. Gentlemen and Ladies was published in 1968 and this was followed in quick succession by A Change For the Better , I’m the King of the Castle , The Albatross , Strange Meeting , The Bird of Night , A Bit of Singing and Dancing and In the Springtime of the Year all written and published between 1968 and 1974. Susan married in 1975 and moved to Stratford upon Avon. Her daughter, Jessica, was born in 1977, followed by a premature daughter Imogen in 1984 who died 5 weeks later. After a period of grieving her creative output continued, particularly in non-fiction and plays for radio. She began writing novels again in the early 1980's, with the successful The Woman in Black (1983), a ghost story, which has achieved great success on the stage, then went on to publish Air and Angels (1991), The Mist in the Mirror (1992), Mrs de Winter (1993) and The Service of Cloud (1997). Susan now lives in a farmhouse set in 50 acres of the North Cotswold countryside.

We endeavour to describe our books accurately, but if you are dissatisfied in any way on receipt of order or wish to cancel the contract for any reason within seven days. The period to start the day after the date on which the goods are received, in which case please contact us to arrange the return and refund of the cost of the goods and delivery. This does not affect your statutory rights. All returned goods should be packed to the same standard as sent. Unless we advise or you request otherwise, books are sent next working day, (often same day)by the method you selected on the check out page. This page also gives the shipping costs, if you have any queries or requirements about shipping please contact us before ordering. On occasion, very heavy books may require an additional shipping amount, if so we will contact you to agree this before the sale is processed.

Seller rating:
This seller has earned a 5 of 5 Stars rating from Biblio customers.
Biblio.com member since 2003
Blagoevgrad Region
Ask Seller a Question

About Books in Bulgaria

The largest English Language second hand bookshop in the Balkans.

Fair
is a worn book that has complete text pages (including those with maps or plates) but may lack endpapers, half-title, etc.... [More]
jacket
Sometimes used as another term for dust jacket, a protective and often decorative wrapper, usually made of paper which wraps... [More]
library binding
A type of reinforced binding designed for libraries, schools, or other applications where a book might experience high... [More]
Mass Market
Mass market paperback books, or MMPBs, are printed for large audiences cheaply.  This means that they are smaller, usually... [More]
reading copy
Indicates a book that is perfectly serviceable for reading. It may have a defect or damage. As such, reading copy is not... [More]
First Edition
In book collecting, the first edition is the earliest published form of a book. A book may have more than one first edition in... [More]
spine
The outer portion of a book which covers the actual binding. The spine usually faces outward when a book is placed on a shelf.... [More]
shelf wear
Shelf wear (shelfwear) describes damage caused over time to a book by placing and removing a book from a shelf. This damage is... [More]