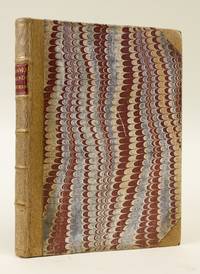 THE WONDERFULL WOORKMANSHIP OF THE WORLD: WHERIN IS CONTEINED AN EXCELLENT DISCOURSE OF CHRISTIAN NATURALL PHILOSOPHIE . . . SPECIALLY GATHERED OUT OF THE FOUNTAINES OF HOLY SCRIPTUR

THE WONDERFULL WOORKMANSHIP OF THE WORLD: WHERIN IS CONTEINED AN EXCELLENT DISCOURSE OF CHRISTIAN NATURALL PHILOSOPHIE . . . SPECIALLY GATHERED OUT OF THE FOUNTAINES OF HOLY SCRIPTUR

London: [Printed by John Kingston] for Andrew Maunsell, 1578. First Edition in English. 189 x 134 mm. (7 3/8 x 5 1/4"). [4], 87, [1] leaves (with foliation errors, but complete).Translated from the Latin by Thomas Twyne. Retrospective half pigskin over marbled boards, raised bands, red morocco label. Title with woodcut ornament, head- and tail-pieces, many decorative initials. Printed in black letter. Front pastedown with Macclesfield bookplate for the South library; title with inscription in ink "Dulcius ex ipso fonte bibuntur aquae" ["Sweetly the waters have been drunk from the fountain itself']; a couple of contemporary annotations in ink (one slightly shaved); numerous marginal readers' marks in ink and pencil. STC 6231; ESTC S105155. Paper a shade or two less than bright, title somewhat soiled, a dark stain affecting the upper corner of ff. 24-28 (touching text but all is legible), but overall a very good, clean copy in a pleasing new binding. This is the first appearance in English of Daneau's 1576 "Physica Christiana," the foundational work of "Mosaic physics," which attempted to reconcile the account of creation in Genesis with scientific knowledge of the natural world in order to create a "Christian natural philosophy." Though obviously theological in origin, "Christian Physics" is nevertheless substantially a work of natural history, generally adopting the Aristotelian worldview then prevalent. The first of two parts is a disquisition on creation, a long Socratic dialogue on the meaning of the opening chapters of Genesis. The second part, which occupies a good deal more than two-thirds of the volume, is a broader treatise on nature, including discussion of such things as light and shadow, meteors, the rainbow, thunder, precious stones, glass, gold, various trees, stars and planets, fish, birds, elephants, foxes, and many more topics. A Calvinist theologian forced into itinerancy because of his incautiously expressed opinions, Daneau (1530-95) produced a considerable number of books, mostly commentaries on the Bible and controversial works written against Lutherans and Catholics alike. Our copy has a couple of curious contemporary marginal annotations. On the verso of fo. 2, at the beginning of the second chapter, someone noted "Five / [s]peciall / [copie?]s of na- / [tu]rall phi- / [lo]sophye." And at the head of fo. 39 (mis-numbered 40] recto is the inscription "Sr. Walter Rawley Laureatus poeta May 4 anno reg. Eliz. 39 anno dom. 1598." There is nothing in Raleigh's biography that can account for his being mentioned as poet laureate in 1598; in that period, he was occupied in naval pursuits against the Spanish armada. It has been suggested that our copy was once owned by scholar and translator Andrew Hartwell (1553-1606), a bibliophile who sometimes used the Latin motto on the title page and marked passages in his books with the floret-like squiggle seen here on ff. 3-12. The book was later in the great library of the earls of Macclesfield. The present work is rare: OCLC and ESTC find 10 copies in U.S. libraries, while ABPC and RBH locate just one other copy at auction in the past 40 years.

title page
A page at the front of a book which may contain the title of the book, any subtitles, the authors, contributors, editors, the...[more]
Marbled boards
...[more]
raised band(s)
Raised bands refer to the ridges that protrude slightly from the spine on leather bound books.  The bands are created...[more]
New
A new book is a book previously not circulated to a buyer. Although a new book is typically free of any faults or defects,...[more]
bookplate
Highly sought after by some collectors, a book plate is an inscribed or decorative device that identifies the owner, or former...[more]
recto
The page on the right side of a book, with the term Verso used to describe the page on the left side.
verso
The page bound on the left side of a book, opposite to the recto page.
leaves
Very generally, "leaves" refers to the pages of a book, as in the common phrase, "loose-leaf pages." A leaf is a single sheet...[more]
A.N.
The book is pristine and free of any defects, in the same condition as ...[more]
First Edition
In book collecting, the first edition is the earliest published form of a book. A book may have more than one first edition in...[more]
soiled
Generally refers to minor discoloration or staining.
morocco
Morocco is a style of leather book binding that is usually made with goatskin, as it is durable and easy to dye. (see also...[more]