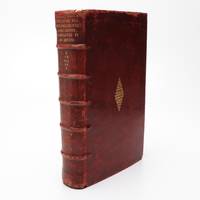 The Works of Virgil: Containing His Pastorals, Georgics, and Æneis: adorn'd with a hundred sculptures

The Works of Virgil: Containing His Pastorals, Georgics, and Æneis: adorn'd with a hundred sculptures

London: Jacob Tonson, 1697. First Illustrated Edition. Full leather. Very good/none as issued. M Vander Gucht; Cleyn; Holler; Lambart. A very good, presumed complete, small paper copy of the First Illustrated edition. Full older red leather with bright gold tooling on cover and bright gold titling on spine. Five raised bands. Rebound. Full leather binding is tight and square. Starting mild red rot at joints. Shelfwear to covers. Untrimmed. Frontis backed onto art paper plus 101 plates. Some waved pages beginning at pg. 45. Moderate to heavy toning and foxing throughout. Multiple pages with loss not affecting text or plates. One long closed tear to page 61. Three short strike through corrections inked by hand to page 35 and page 133, otherwise clean.Three misprinted page numbers, but text is complete (224 for 220, 448 for 484, and 503 for 493) page 638 bound in last (out of order). 640 pp. plus errata, unpaginated dedications, [102] plates, and reviews. Folio, 8 & 3/4 x 14 & 1/2 inches tall (text block). This is very large and heavy and will require extra shipping charges, billed at cost.Contents:To the Lord CliffordThe Life of VirgilPreface to the PastoralsTo Mr. Dryden [Five reviews] ErrataThe Names of the First Subscribers The Names of the Second Subscribers Pt. I: Pastorals (1-10)To the Right Honorable PhillipAn Essay on the GeorgicsPt. II: The Georgics (1-4)To the Most Honorable John of NormandyPt. III: Virgil's Æneis (1-12)Post ScriptNotes and Observations Same edition as copy held by the British Library [Wing V-616].Barnard, John. "The Large- and Small-Paper Copies of Dryden's "The Works of Virgil" (1697): Jacob Tonson's Investment and Profits and the Example of "Paradise Lost" (1688)." The Papers of the Bibliographical Society of America 92, no. 3 (1998): 259-71."This magnificently illustrated book is the first edition of John Dryden’s translation of Virgil, the ancient Roman poet. The collection includes the Pastorals or Eclogues, a source for the Renaissance Arcadian ideal; Georgics, an agricultural poem in four parts; and Virgil’s masterpiece the Aeneid, an epic poem chronicling the adventures of Aeneas, legendary ancestor of the Romans.The Works of Virgil (1694–97) was conceived, created and circulated by Dryden and the publisher Jacob Tonson. Their successful partnership established publishing methods and an aesthetic movement that shaped and defined literary production in the 18th century.TranslationDryden did not translate Virgil’s work directly or literally into English. Instead, he revised, added to and reworked the classical Latin to make the poetry vivid and relevant to late 17th-century readers. In his ‘Dedication to John, Lord Marquess of Normanby, Earl of Mulgrave’, Dryden explains that his alterations were done with great reverence, and were only ever intended to extend and expand upon Virgil’s poetry: ‘They will seem (at least I have the vanity to think so), not struck into him, but growing out of him’ (sig. E4v).This translation technique was immensely popular. It sparked a new, more intuitive appreciation for classical literature and its translation which, in turn, grew into the clever, confident literary movement of the early 18th century known as the English Augustan Age, a period characterised by the poetry of Alexander Pope, the drama of John Gay and Jonathan Swift’s satire.SubscriptionDryden’s work translating the text and the overall publishing costs were funded in advance by private subscribers, all of whom are named and acknowledged at the opening of the book (Sig. ††1r–††2v) and within cartouches at the bottom of the intricate illustrations that appear throughout. This innovative way of financing a large and lavish text was, like Dryden’s approach to translation, adopted with great success in the 18th and 19th centuries." --- The British Library

errata
Errata: aka Errata Slip A piece of paper either laid in to the book correcting errors found in the printed text after being...[more]
raised band(s)
Raised bands refer to the ridges that protrude slightly from the spine on leather bound books.  The bands are created...[more]
First Edition
In book collecting, the first edition is the earliest published form of a book. A book may have more than one first edition in...[more]
spine
The outer portion of a book which covers the actual binding. The spine usually faces outward when a book is placed on a shelf....[more]
tight
Used to mean that the binding of a book has not been overly loosened by frequent use.
shelfwear
Minor wear resulting from a book being place on, and taken from a bookshelf, especially along the bottom edge.
folio
A folio usually indicates a large book size of 15" in height or larger when used in the context of a book description....[more]
New
A new book is a book previously not circulated to a buyer. Although a new book is typically free of any faults or defects,...[more]