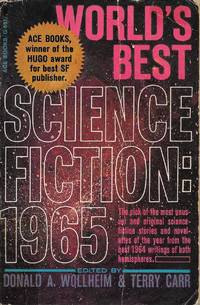 by Donald A. Wollheim, Terry Carr

New York: Ace, 1965. first thus. Mass Paperback. Good. Jack Gaughan. First edition. Spine is creased and reinforced with tape. Cover has many creases. Old bookstore stamp inside front cover. Pages are clean and unmarked, tanning. Ace mass paperback, 1st edition, first printing 1965, Ace #G-551, 288 pages, interior art by Jack Gaughan. 12mo (6.5" x 4.25") First in series of best of year anthologies, which changed publishers in 1973, had its final volume in 1990, ending with the death of editor Wollheim. Contents: Introduction, essay by Donald A. Wollheim and Terry Carr. Stories: Greenplace, by Tom Purdom; Men of Good Will, by Ben Bova and Myron R. Lewis; Bill for Delivery, by Christopher Anvil; Four Brands of Impossible, by Norman Kagan; A Niche in Time, by William F. Temple; Sea Wrack, by Edward Jesby; For Every Action, by C. C. MacApp; Vampires Ltd., by Josef Nesvadba (translation, by Iris Urwin, of Upir ltd); The Last Lonely Man, by John Brunner; The Star Party, by Robert Lory; The Weather in the Underworld, by Colin Free; Oh, to Be a Blobel! by Philip K. Dick; The Unremembered, by Edward Mackin; What Happened to Sergeant Masuro? by Harry Mulisch (translation, by Roy Edwards, of Wat Gebeurde er met Sergeant Massuro?); Now Is Forever, by Thomas M. Disch; The Competitors, by Jack B. Lawson; When the Change-Winds Blow, by Fritz Leiber.

First Edition
In book collecting, the first edition is the earliest published form of a book. A book may have more than one first edition in... [More]
12mo
A duodecimo is a book approximately 7 by 4.5 inches in size, or similar in size to a contemporary mass market paperback.... [More]
spine
The outer portion of a book which covers the actual binding. The spine usually faces outward when a book is placed on a shelf.... [More]