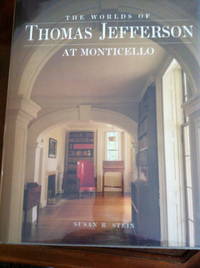 Worlds of Thomas Jefferson at Monticello

Worlds of Thomas Jefferson at Monticello

Harry N Abrams, NY, 1993. 1st edition. Hardcover. Fine/Fine. "Thomas Jefferson was, by any reckoning, one of the most remarkable men ever to have crossed America's political stage. ...he also was able to design his own house, Monticello, the magnificent Palladian mansion in central Virginia, and later to establish the University of Virginia and to plan its principal buildings. And, through all this, Jefferson made purchases for a lifetime. Needing to furnish not only Monticello but also the ministerial residence in Paris - the Hotel de Langeac - and the President's House in Washington, Jefferson bought with consummate taste and an extraordinary eye for the newest in American, English, and French styles. Fascinated by science and the growing field we now call "technology, " Jefferson procured or had built devices for copying letters, telescopes for exploring the stars, and even dumbwaiters to minimize dependence on servants at mealtimes. ...he acquired examples of its fossils, flora, and fauna ...he purchased original paintings and had copied what could not be bought. He commissioned busts of his intellectual heroes, as well as of the heroes of the American struggle for independence. The 'Worlds of Thomas Jefferson' assembles more than 150 of the objects Jefferson acquired..." [Pub. Info] Larger format; 472 pages. Published in conjunction with the Thomas Jefferson Memorial Foundation. Includes paintings, drawings, portraits, sculpture, silver, ceramics, maps, natural history, musical instruments, and personal items. [Please check shipping costs for larger format books and multi-volume sets.] 1ST EDITION.

Seller rating:
This seller has earned a 5 of 5 Stars rating from Biblio customers.
Biblio.com member since: 2013
Denver, Colorado
Ask Seller a Question