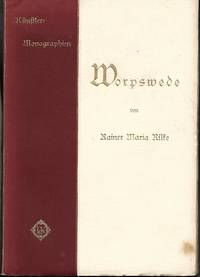 Bielefeld Und Leipzig: Velhagen & Klasing, 1903. The head of the spine is bumped as is the fore-edge, neither badly, and there is a small stain(cigarette? match?) on the tail of the front cover, and a very small patch of discolouration on the back. The front end paper is foxed. A nice copy, clean, solid and apart from minor blemishes described, unmarked. 124 pages. Künstler-Monographien, Band LXIV, Liebhaber-Ausgaben. "Worpswede school, group of artists who settled after 1889 in the north German village of Worpswede, near Bremen, in order to paint the local landscape. They depicted the heaths, meadows, forests, streams, bridges, windmills, and peasants of the area in a romantic and sentimental style, somewhat reminiscent of the earlier 19th-century Barbizon school in France. Fritz Mackensen and Otto Modersohn were the first to arrive; during the 1890s they were joined by Paula Becker (who later married Modersohn), Hans am Ende, Fritz Overbeck, and Heinrich Vogeler. Clara Westoff, a talented sculptor, also worked at Worpswede, where she met the German poet Rainer Maria Rilke, whom she married in 1901. Two years later Rilke published a book, Worpswede, discussing the artists and the landscape. The Worpswede painters exhibited their works at the Glaspalast in Munich in 1895, achieving recognition when Mackensen was awarded a gold medal for his painting - Sermon in the Moors.Although popular with the public during the late 1890s, the Worpswede painters’ success did not endure. As regionalist painters they were isolated from the advanced achievements of French art and, with the exception of Paula Modersohn-Becker, were unaware of Postimpressionist painting. Inspired by the works of Vincent van Gogh, Paul Gauguin, and Paul Cézanne, which she saw on her trips to Paris, Modersohn-Becker’s style evolved toward flatness and simplification, anticipating the Expressionist movement in Germany." (Britannica). Soft Cover. Very Good. 4to - over 9¾" - 12" tall.

Seller rating:
This seller has earned a 5 of 5 Stars rating from Biblio customers.
Biblio.com member since: 2008
Benalla, Victoria
Ask Seller a Question

Good Reading operates from a house, which is all bookshop, and holds approximately 35,000 titles. It is open by appointment only.Benalla is a country town two and a half hours north of Melbourne on both the Hume and the Midland Highway.

spine
The outer portion of a book which covers the actual binding. The spine usually faces outward when a book is placed on a shelf....[more]
tail
The heel of the spine.
foxed
Foxing is the age related browning, or brown-yellowish spots, that can occur to book paper over time. When this aging process...[more]