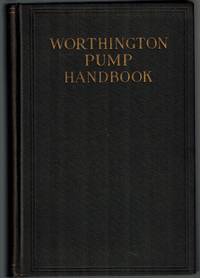 Worthington Pump Handbook. Design, Construction, and Application of All Commercial Pumps, with laid in Trade Standards in the Pump Industry

Worthington Pump Handbook. Design, Construction, and Application of All Commercial Pumps, with laid in Trade Standards in the Pump Industry

Seller rating:
This seller has earned a 5 of 5 Stars rating from Biblio customers.
Biblio.com member since 2006
Bloomington, Indiana
Ask Seller a Question

First Edition
In book collecting, the first edition is the earliest published form of a book. A book may have more than one first edition in... [More]
gilt
The decorative application of gold or gold coloring to a portion of a book on the spine, edges of the text block, or an inlay in... [More]
fine
A book in fine condition exhibits no flaws. A fine condition book closely approaches As New condition, but may lack the... [More]
wrappers
The paper covering on the outside of a paperback. Also see the entry for pictorial wraps, color illustrated coverings for... [More]
laid-in
"Laid In" indicates that there is something which is included with, but not attached to the book, such as a sheet of paper. The... [More]
Cloth
"Cloth-bound" generally refers to a hardcover book with cloth covering the outside of the book covers. The cloth is stretched... [More]
jacket
Sometimes used as another term for dust jacket, a protective and often decorative wrapper, usually made of paper which wraps... [More]