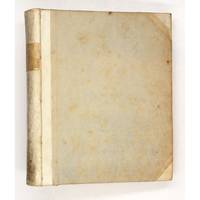 Amsterdam: Heinrich & Dietrich Boom, 1671. First edition in German. Small 4to, pp.[ii, engraved title], [vi], 392, [1, colophon], [1, blank], 11 plates. Bound in 18th-century quarter vellum over boards. Lower hinge split, lower board still attached to spine. Contents in very good condition. The first German edition of the travels of Fernão Mendes Pinto (1509-1583), who left Portugal as a young man to sail to the Far East. By 1541 he had reached Malacca, which he describes in great detail, together with the struggles of its ruler against Aceh. From Malacca, Pinto sailed to Hainan, and then along the Chinese coast. After several battles with pirates, Pinto's party made port at Ningbo, but were quickly expelled from the city. They travelled on to Nanjing and then Beijing, where Pinto was imprisoned for robbing an imperial grave. Sentenced to hard labour on the Great Wall, he offered his services to an invading Mongol army. He eventually reached Malacca, by way of a voyage to the Japanese island of Kyushu, in 1545. Pinto wrote this narrative in old age, spicing his youthful memories with a mixture of imagination and other travellers' narratives. Some elements of his own travels have been questioned, but many details are corroborated in contemporary sources, and the more fantastical details are readily recognised. These travels were first published in Portuguese in 1614 and proved enormously popular. Pinto's travelogue shaped the European idea of the Far East. By 1700 it had been published in six languages across nineteen different editions. Cordier BS 2068; Morrison II, p.334; Reiss & Auvermann 675. COPAC records a single copy at the British Library.

vellum
Vellum is a sheet of specialty prepared skin of lamb, calf, or goat kid used for binding a book or for printing and writing. ...[more]
spine
The outer portion of a book which covers the actual binding. The spine usually faces outward when a book is placed on a shelf....[more]
First Edition
In book collecting, the first edition is the earliest published form of a book. A book may have more than one first edition in...[more]
hinge
The portion of the book closest to the spine that allows the book to be opened and closed.