Rare books World War I More Rare Books from Antipodean Books, Maps & Prints W.W.I Manuscript Journal recording the exploits of H.M.S. Doris in the Dardanelles in April 1915, as recorded by… 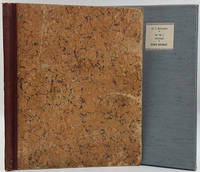 W.W.I Manuscript Journal recording the exploits of H.M.S. Doris in the Dardanelles in April 1915, as recorded by H. J. Bowden, Stoker

W.W.I Manuscript Journal recording the exploits of H.M.S. Doris in the Dardanelles in April 1915, as recorded by H. J. Bowden, Stoker

Seller rating:
This seller has earned a 2 of 5 Stars rating from Biblio customers.
Biblio.com member since: 2009
Garrison, New York
Ask Seller a Question

leaves
Very generally, "leaves" refers to the pages of a book, as in the common phrase, "loose-leaf pages." A leaf is a single sheet...[more]
Cloth
"Cloth-bound" generally refers to a hardcover book with cloth covering the outside of the book covers. The cloth is stretched...[more]
Marbled boards
...[more]
G
Good describes the average used and worn book that has all pages or leaves present. Any defects must be noted. (as defined...[more]