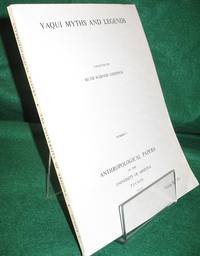 by Ruth Warner Giddings (1919-?) collector from the library of Professor George M Foster

73 pages with references. Quarto (10 1/2" x 8") bound in original wrappers. From the library of George M Foster. Anthropological Papers of the University of Arizona, number 2. First edition.

Until this time no thorough collection or study had been made of the folk traditions of the Yaquis. Only about a score of Yaqui stores were to be found in published form. Alfonso Fabila had printed five stories and three songs. Spicer reviewed a half-dozen stories and note the existence of animal tales among the Yaquis of Arizona. Beals had published a few Yaqui traditions about serpents and thirteen myths and tales identified as Cahita. A brief resume of Yaqui tradition by one of their leaders had been printed in an appendix to a work by Holden, etal. In manuscript form, Johnson had recorded the Spanish and Yaqui texts of a small well rounded collection of stories and Wilder had contributed a collection and study of Yaqui deer-songs from Pascua village, Arizona. It is known that Yaqui society has been influenced strongly by Spanish and Mexican culture, judging from indications in historical records and from studies of modern Yaquis. In making this collection of stories it was the objective to illustrate two things: (1) the nature of the folk literature of the Yaquis and (2) the influences of which successive foreign contacts have exerted upon the Yaqui folklore. These collections were made in Potam, Sonora from February through April of 1942 and during regular visits to Pascua and Barrio Libre near Tucson from May to September of the same year.

wrappers
The paper covering on the outside of a paperback.  Also see the entry for pictorial wraps, color illustrated coverings for...[more]
sunned
Damage done to a book cover or dust jacket caused by exposure to direct sunlight.  Very strong fluorescent light can cause...[more]
spine
The outer portion of a book which covers the actual binding. The spine usually faces outward when a book is placed on a shelf....[more]
quarto
The term quarto is used to describe a page or book size. A printed sheet is made with four pages of text on each side, and the...[more]
First Edition
In book collecting, the first edition is the earliest published form of a book. A book may have more than one first edition in...[more]