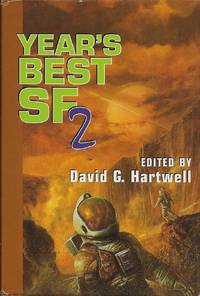 Building on the unprecedented success of last season's Year's Best, award-winning editor David G. Hartwell has once again scoured the magazines and anthologies to bring together the very best of today's edgy, audacious, and innovative SF. Here are machines that dream and stars that sing; tales from notable pros and heretofore unknowns;wondrously diverse stories that share the sense of wonder that is the mark of great science fiction. " Includes stories by: Gregory Benford, Terry Bisson, James Patrick Kelly, Damon Knight, Joanna Russ, Bruce Sterling, Connie Willis, and many others!

spine
The outer portion of a book which covers the actual binding. The spine usually faces outward when a book is placed on a shelf....[more]
New
A new book is a book previously not circulated to a buyer. Although a new book is typically free of any faults or defects,...[more]
reprint
Any printing of a book which follows the original edition. By definition, a reprint is not a first edition.
jacket
Sometimes used as another term for dust jacket, a protective and often decorative wrapper, usually made of paper which wraps...[more]
G
Good describes the average used and worn book that has all pages or leaves present. Any defects must be noted. (as defined...[more]