Home The Lawbook Exchange Ltd You Should Not. A Book for Lawyers Old and Young 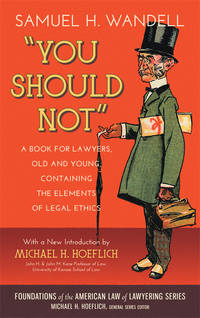 You Should Not. A Book for Lawyers Old and Young

You Should Not. A Book for Lawyers Old and Young

2014. ISBN-13: 9781616194550. ISBN-10: 1616194553. From the series Foundations of the American Law of Lawyering, Michael H. Hoeflich, General Series Editor Wandell, Samuel H. "You Should Not." A Book for Lawyers, Old and Young, Containing the Elements of Legal Ethics. Originally Published: Albany, NY: Matthew Bender, 1896. xix (iii-xix new introduction), [vii], 100 pp. Reprinted 2014 by The Lawbook Exchange, Ltd. With a new introduction by Michael H. Hoeflich, John H. & John M. Kane Professor of Law, University of Kansas School of Law. ISBN-13: 9781616194550. ISBN-10: 1616194553. Hardcover. New. $39.95 * "'You Should Not' is more than a period piece. It is a document which reflects both the origins of many of our modern ideas about legal ethics and professional responsibility as well as the changing notions of proper behavior that surfaced in the last quarter of the nineteenth century. It is a book that witnesses the insecurity felt by the elite members of a changing legal profession, changing demographically, culturally, ethnically, and economically. Above all, it is a document which shows how the American legal profession's quest for dignity and respectability continued to be a major theme of juristic writing throughout the nineteenth century." -- Michael H. Hoeflich, xix. SAMUEL H. WANDELL [1863-1943] was a New York lawyer and judge. He was the author of numerous literary and legal works, including The Law Relating to the Disposition of Decedent's Real Estate (1889), The Law of Inns, Hotels, and Boarding Houses (1888), The Law of the Theatre (1891) and The Law in Relation to Public Contract Liens (1932). With Meade Minnigerode, he was the author of the two volume biography, Aaron Burr (1925).