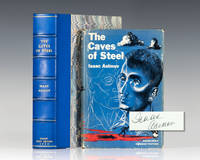 Description:
Garden City, NY: Doubleday & Company, Inc, 1954. First edition of the first work in Asimov's acclaimed Robot series. Octavo, original blue boards, red topstain. Signed by Isaac Asimov on the title page. Light wear to the cloth, near fine in a very good dust jacket with some rubbing and wear to the extremities. Dust jacket design by Ruth Ray. Housed in a custom half morocco clamshell box. Rare and desirable signed. "One of the classic presentations of the womb-city, metropolis as mother, which has haunted imaginations ever since... The Caves of Steel and The Naked Sun are the best books Isaac Asimov ever wrote" (The Guardian). In 2004 The Caves of Steel was nominated for a retroactive Hugo Award for Best Novel for 1954. A television adaptation was made by the BBC and shown in 1964: only a few short excerpts still exist. In 1989, the book was adapted by Bert Coules as a radio play for the BBC, with Ed Bishop as Elijah Baley and Sam Dastor as R. Daneel Olivaw.
Item Price
$12,500.00
FREE shipping to USA

Description:
Doubleday, 1954 First Edition, First Printing with "First Edition" printed on the copyright page, SIGNED by Isaac Asimov on a laid in signature. A beautiful dustjacket that is vibrant in color with slight wear to the edges. The book is in nice shape. The binding is tight and the boards are crisp with minor wear to the edges. The pages are exceptionally clean, with no writing, marks or bookplates in the book. Overall, a lovely copy of this true first edition SIGNED by the author. We buy Asimov First Editions.. Signed by Author(s). 1st Edition. Hardcover. Fine/Fine.
Item Price
$4,750.00
FREE shipping to USA