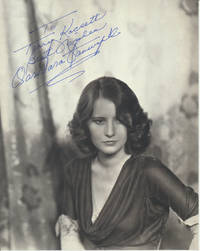 Description:
1963. ("Barbara Stanwyck") in black ink on 1/2 length glamour portrait wearing a lace dress, stunning diamond necklace, left shoulder to the camera, head tilted, looking to the left of the camera. Photograph is by John Engstead (no stamp present) and is on heavy weight stock; matte finish; 8" x 10". Very good. Signed and inscribed to publicist L. Allan Smith: "To L. Allan Smith my thanks - God bless you Barbara Stanwyck 1963." Provenance: from the estate of L. Allan Smith.. Signed by Author(s). No Binding. Very Good/No Jacket.
Item Price
$150.00
$9.99 shipping to USA 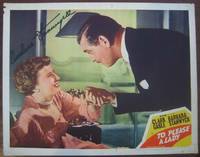 Try adding this search to your want list. Millions of books are added to our site everyday and when we find one that matches your search, weŌĆÖll send you an email. Best of all, itŌĆÖs free.

Join the Bibliophile's Club and save 10% on every purchase, every day ŌĆö up to $25 savings per order!