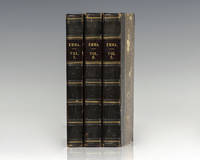 Description:
London: John Murray, 1816. First edition of the final novel published during Austen's lifetime. Small octavo, 3 volumes, bound in contemporary three quarters leather, gilt titles to the spine. With the publisher's advertisements on the verso of the last page of Vol. III. In near fine condition with light toning. Housed in a custom half morocco clamshell box. An exceptional example, most rare and desirable in this condition and in a contemporary binding. After many publishing delays, Austen decided to self-finance the publication of Emma, paying printer John Murray a 10% commission and retaining the remaining profits. "Emma was the fourth and last novel which Jane Austen published in her lifetime. When it was written the author was at the height of her powers, and she wrote the book rapidly and surely, encouraged by the success of her previous novels to express herself with confidence in the way peculiarly her own" (Rosenbach 29:24). "Jane Austen's fourth novel has a profundity… Read More
Item Price
$40,000.00
FREE shipping to USA 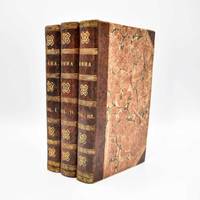 Description:
FIRST EDITION, 3 vols., contemporary half calf over marbled boards, spine gilt, 12mo, without half titles, London, John Murray, 1816
Jane Austen (1775 ŌĆō 1817), one of the greatest romantic English novelists. Her work is known to interpret, critique and comment upon the aristocracy at the end of the 18th century. Austen's plots often explore the dependence of women on marriage in the pursuit of favourable social standing and economic security. Emma is no different, a comedy of manners, about youthful hubris and romantic misunderstandings. The novel covers issues of marriage, sex, age and social status. Austen's use of biting irony, along with her realism, humour, and social commentary, have long earned her acclaim among critics, scholars, and popular audiences alike. Emma was the last novel published in Austen's lifetime. She published 2000 copies at her own expense in order to retain the copyright. Murray was credited 10%. Austen dedicated the novel to the Prince Regent after a suggestion from the… Read More
Item Price
$32,844.00
$12.25 shipping to USA

Description:
London: John Murray, 1816. First Edition. Three volumes; with half-titles in vols. II & III; bound in contemporary green quarter-morocco with mottled paper boards and matching endpapers; rebacked with the original spines laid down. Decorated in gilt and in blind; contemporary ownerŌĆÖs signatures on the first blank of each volume; a very clean and attractive set; in a half-morocco clamshell box. Printed in an edition of 2000 copies at the authorŌĆÖs expense, the book was reasonably successful for its then-anonymous author.
Item Price
$32,500.00
$9.00 shipping to USA

Description:
3 vols. London: Printed for John Murray, 1816. 3 vols., sm. 8vo in 12s, (173 x 105 mm), [4], 322, [1, blank]; [4], 351, [352, printer's imprint]; [4], 363, [364, ads.] pp. Very early half calf, rebacked to style, blue/grey boards, tips scuffed. Ink signature in each volume of "Mr. Murray of Simp(illeg.)". Occasional light spotting but generally very pleasing, a very good copy. ┬¦ First edition. Bound without the half-title in volume I as usual: this leaf was printed as part of the last signature and was therefore either overlooked (and left in place) or discarded by many binders of the period. Emma, published on 29 December 1815, was written after AustenŌĆÖs move to Chawton, and was the last novel to be completed and published during her life. It is Austen at her most sharp and most subversive, creating under the nose of her contemporaries a thoroughly modern novel which continues to speak through countless editions and adaptations. 2000 copies were printed. The identity of ŌĆ£Mr. MurrayŌĆØ has not… Read More
Item Price
$29,750.00
$6.35 shipping to USA

Description:
Carey & Lea, Philadelphia, 1833 First Edition, First Printing of this two volume set. An attractive copy bound in the original publisher's cloth spine with drab boards. The bindings for both books are tight with NO cocking or leaning with some wear to the boards. The pages are clean with NO writing, marks or bookplates in the book. Overall, a lovely set housed in a custom clamshell slipcase. We buy Jane Austen First Editions.. 1st Edition. Hardcover. Near Fine.
Item Price
$25,000.00
FREE shipping to USA 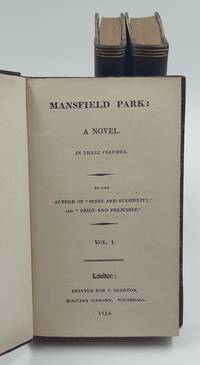 Description:
London: Printed for T. Egerton 1814, 1814. First edition. Three volumes. 12mo. 167x100mm. pp. (i), 360; (i), 294; (i), 354. Lacking half-titles. Twentieth-century green half-calf, marbled boards, spines ruled in gilt with two burgundy labels lettered in gilt. Internally near fine with very occasional slight staining on a few leaves, not affecting the text. Repaired tear to final leaf of volume. This is a very attractive, handsomely rebound set of Jane Austen's third novel. Often regarded as her most serious, and certainly her darkest and most moralistic novel, Mansfield Park met with immediate success and this first edition sold out within six months, although no more than 1,250 were thought to have been printed. John Murray (who published the second edition in 1816) "expressed astonishment that so small an edition of such a work should have been sent out into the world". Indeed. Gilson. A6.
Item Price
$23,948.75
$34.21 shipping to USA 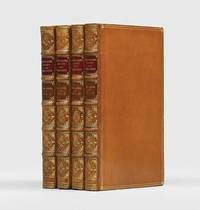 Description:
Carey & Lea, Philadelphia, 1832 First Edition, First Printing of this two volume set. An attractive copy bound in the original publisher's cloth spine with drab boards. The bindings for both books are tight with NO cocking or leaning with some wear to the boards. The pages are clean with NO writing, marks or bookplates in the book. Overall, a lovely set housed in a custom clamshell slipcase. We buy Jane Austen First Editions.. 1st Edition. Hardcover. Fine.
Item Price
$20,000.00
FREE shipping to USA 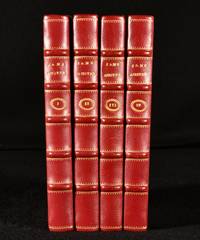 Description:
London: John Murray, 1818. First edition. Fine Binding. Near Fine. 7" by 4.5". None. An exquisitely bound, first edition set of Jane Austen's final two novels, 'Northanger Abbey' and 'Persuasion'. In beautiful recent half calf bindings, with marbled paper boards.┬Ā The title pages state 'By the author of 'Pride and Prejudice', 'Mansfield-Park' &amp;c'. The biographical preface to the first volume is written by Henry Austen, and is the first public acknowledgement of Jane Austen being the author of all her novels. Collated, the half-titles and final blanks to volume IV have been discarded, as is common with rebound works. These two novels were published posthumously. Northanger Abbey is a Gothic novel parody, which was drafted by Austen fifteen years earlier under the working title 'Susan'. She had initially sold it in 1803 to a London bookseller, but the work was not printed. She abandoned her efforts following the publication of another novel under this name in 1809. Persuasion… Read More
Item Price
$22,990.80$19,542.18
Save $3,448.62 !
$16.35 shipping to USA 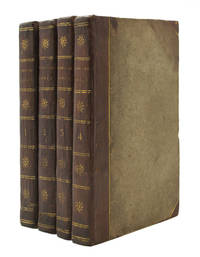 Description:
First Edition of "Northanger Abbey" and "Persuasion" [AUSTEN, Jane]. Northanger Abbey: and Persuasion. By the Author of ├¼Pride and Prejudice,├« ├¼Mansfield-Park,├« &c. With a Biographical Notice of the Author. In Four Volumes. London: John Murray, 1818. First edition. Four twelvemo volumes (6 13/16 x 4 inches; 174 x 102 mm). xxiv, 300; [4], 331, [1, blank]; [2], 280; [2], 308 pp. Bound without half-titles in Volumes III, and IV, and without final blank leaves P7 and P8 in Volume IV. Gilson calls for the half-title of Volume I to be bound in the A11 position, but in present copy, it is bound before the title-page (A1). From the Library of Austen biographer Park Honan. Contemporary half calf over drab boards. All volumes with some restoration to spines. Calf ruled in gilt. Spines stamped and lettered in gilt. Edges speckled brown. Drab endpapers. Previous owner's armorial bookplate to front pastedown of each volume. A tear to inner margin of the title-page of Volume IV, not affecting… Read More
Item Price
$15,000.00
$10.00 shipping to USA 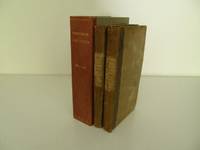 Description:
Carey & Lea, Philadelphia, 1832 First Editions, First Printings of both books in this two volume set. This First American edition is bound in the publisher's muslin backed boards with the ORIGINAL spine labels. The pages are clean with light foxing, minor wear to edges and printed label of "Hosford's Circulating Library" on the front pastedowns. There is NO writing or marks in the books. Overall, a lovely copy of this First Edition housed in a custom clamshell slipcase for preservation. We buy Jane Austen First Editions.. 1st Edition. Hardcover. Near Fine.
Item Price
$15,000.00
FREE shipping to USA 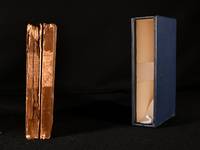 Description:
Philadelphia: Carey & Lea, 1832. First edition. Cloth. Good. 8" by 4.5". None. A scarce, first American edition of Jane Austen's final novel. In the publisher's original binding, and with the scarce adverts. Complete with the often missing publisher's catalogue to the rear of the first volume for Carey and Lea.┬ĀThese volumes are in the publisher's original binding, and held in a very bright custom slipcase.┬ĀA scarce edition of Jane Austen's final novel. Persuasion was first published in England six months after Austen's death. It concerns Anne Elliot,┬Āthe 27 year old protagonist whose family moves to lower their expenses. This novel is often regarded as Austen's most maturely written novel.┬ĀUpon initial publication this work received moderate success, but its fame came later into the nineteenth century and continued onward to the twentieth and twenty-first centuries.┬ĀGilson (B3) notes that 'relatively few copies of the 1832-1833 Philadelphia editions are known to survive'.┬ĀAusten's novels… Read More
Item Price
$16,422.00$13,958.70
Save $2,463.30 !
$16.35 shipping to USA 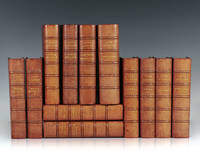 Description:
Boston: Roberts Brothers, 1892. One of only 250 examples of the work of Jane Austen. Octavo, 12 volumes, bound in full calf and marbled boards by Sangorski and Sutcliffe, gilt titles to the spine, raised bands, all edges gilt, inner dentelles, frontispieces. In near fine condition. An exceptional set. "Generations of readers have marveled at the modernity of her work She is the mother of the English 19th-century novel as Scott is the father of it" (Kunitz & Haycraft, 23).
Item Price
$8,800.00
FREE shipping to USA 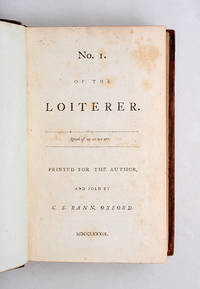 Description:
Oxford: Printed for the author and sold by C. S. Rann [others in later parts], 1789-90. Who created Sophia Sentiment? First edition, possibly Jane Austen's first appearance in print. This scarce periodical was written by James and Henry Austen while they were at Oxford. Some scholars have suggested that in issue number 9, the letter signed "Sophia Sentiment" was the work of their sister Jane when she was 14. Although Gilson does not include this work in his Bibliography, there is a strong case that the work was written by Jane Austen. According to the British Library, "critics such as Paula Byrne have noted that there are various correspondences between the letter and Jane Austen's juvenilia. Her early, epistolary novel Love and Freindship [sic], for example, has two heroines quite as shallow as Sophia. But other critics, such as Kathryn Sutherland and Claire Tomalin, find it unlikely that Austen would have written a letter so critical of women's reading choices. They suggest that Sophia Sentiment's… Read More
Item Price
$6,842.50
$16.42 shipping to USA 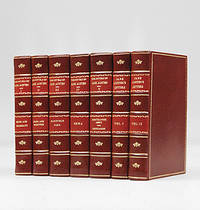 Try adding this search to your want list. Millions of books are added to our site everyday and when we find one that matches your search, weŌĆÖll send you an e-mail. Best of all, itŌĆÖs free.

Join the BibliophileŌĆÖs Club and save 10% on every purchase, every day — up to $25 savings per order!