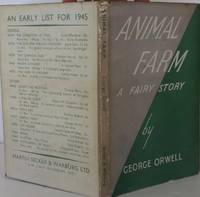 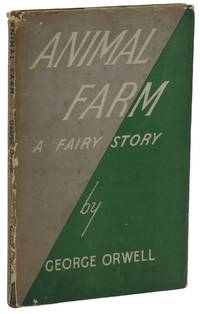 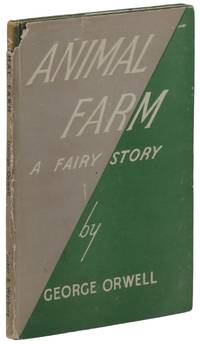 Description:
London: Secker & Warburg, 1945. First Edition. Very Good/Very Good. First edition, first printing. Bound in publisher's original green cloth with spine lettered in white. Very Good with vertical creases to the boards, fading to top of spine cloth, set of staple punctures to front free endpaper and toning to pages. In a Very Good unclipped dust jacket with the Searchlight Books advert printed in red on the verso; chip to crown and light wear at extremities, but overall a much nicer than average survival of the jacket. A lovely copy.
Item Price
$8,500.00
FREE shipping to USA 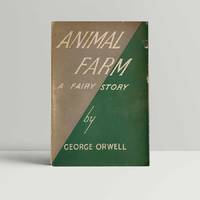 Description:
London: Secker and Warburg, 1945. A first edition, first printing published by Secker and Warburg in 1945. A very good book with inscriptions. Some mottling to the front and rear boards - contents are clean. Slight cracking at hinges as is common. In a very good (or better) clipped dust wrapper with Searchlight Books advertisement printed in blue to the verso. Some abrasions here and there to the hinges and upper panel fore-edge, though less rubbing to the spine panel than is often seen. Some shallow chipping to the spine ends and corners with some internal neat tape reinforcement to spine and hinges. A very good copy without restoration - first editions of this title are genuinely thin on the ground at present.
Item Price
$7,472.40
$8.66 shipping to USA 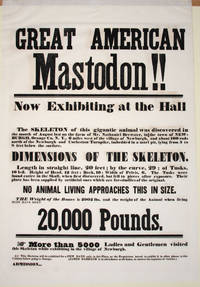 Description:
[United States], 1846. No Binding. Near Fine. [64.5cm x 44.3cm; 25.5" x 17.5"]. Large broadside. Minor offset toning. A well-preserved example. Rare, boldly printed broadside announcing the early exhibition of one of the most famous discoveries in the history of American paleontology, that of the 'Warren Mastodon,' excavated in 1845 from a peat bog near Newburgh, New York, and since 1906 on display at the Museum of Natural History. The animal, which perished some 11,000 years ago, was an immediate sensation owing to its bones' near complete state of preservation and its status as the largest extinct species yet discovered in America (the first American dinosaur, a Hadrosaurus, was identified in Haddonfield, New Jersey, in 1858). Found on the farm of Nathaniel Brewster, the mastodon skeleton toured New England until it came to the attention of the surgeon Dr. John Collins Warren, who quickly purchased the beast, wrote a monograph about it (The Mastodon Giganteus of North America, Boston, John… Read More
Item Price
$5,500.00
$3.50 shipping to USA 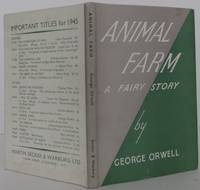 Description:
I.Cherniatins'kii ŌĆō translation from English.
M. Grigoriiv - covers.
N.p. [Neu-Ulm], Prometei, N.d. [1947], 8vo, 91 pp., portrait, in original illustrated wrappers, in good condition, wears to top and bottom of spine, slightly spotted to several pages.
First translation of the novel from English with special foreword by G. Orwell. Orwell partially paid the costs of printing.
One of the rarest and important edition published in DP camp.
Initially Orwell planned the novel as satire on English society. Further the novel began to be considered as satire on Stalin society. In the title of the book the translator consciously used the word "ą║ąŠą╗ą│ąŠčüą┐" (collective farm) and referring the reader directly to the Soviet system.
The important part of the foreword by G. Orwell is naming of the repression in USSR in 30s as a Great Purges: "In 1936 I got married. In almost the same week the civil war broke out in Spain. My wife and I both wanted to go to Spain and fight for the Spanish Government. ŌĆ” In… Read More
Item Price
$3,620.00
$30.50 shipping to USA 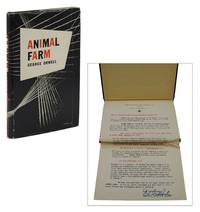 Description:
New York: Harcourt, Brace and Company, 1946. First Edition. Near Fine/Very Good. First American edition, first printing. Review copy with letter from the publisher folded in half and tipped in at front free endpaper, protruding slightly over the textblock. Bound in publisher's original black cloth with spine lettered in gilt. Near Fine with light wear to cloth. In a Very Good unclipped dust jacket, correctly lacking "Printed in the USA" on the rear flap; with light rubbing and edge wear, light crease to front panel and front flap. Uncommon with publisher's letter tipped in.
Item Price
$2,500.00
FREE shipping to USA 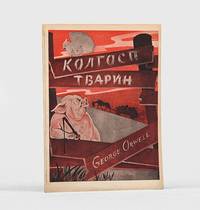 Description:
Munich: Vidavnitstvi Prometei, 1947. The first appearance in print of Orwell's preface First Ukrainian edition, and the first to include a preface by Orwell. A copy of the first English edition of 1945 fell into the hands of Ihor Shevchenko, a son of Polish anti-Bolshevik nationalists, who translated the work into Ukrainian. This edition is scarcely found in such excellent condition."In April 1946, Shevchenko wrote to Orwell, a mourning widower and single parent of adopted baby at that time, requesting authorization to publish his Ukrainian translation. He described to him how he had translated the book out loud to a transfixed audience of Ukrainian DPs [displaced persons] and they had always been puzzled how the West could be so na├»ve about the Soviet Union and wondered if anyone 'knew the truth'. He concluded: 'Your book has solved that problem... Refugees reacted to the underlying values of the book, to the tale 'types,' to the underlying convictions of the author and so on. Besides, the mood of… Read More
Item Price
$2,179.45
$14.94 shipping to USA 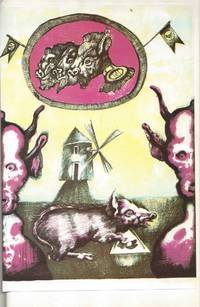 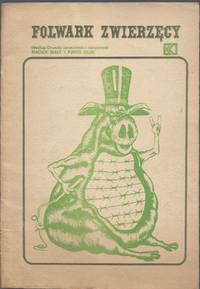 Condition
Used - Wrappers and pages yellowed due to the acidic paper. Overall in fine condition.
Edition
First edition. Text in Polish. A4 format, with drawings on pp. 3
Quantity-available
1
Seller
Foldvaribooks
Budapest, Hungary
Seller rating:
This seller has earned a 5 of 5 Stars rating from Biblio customers.
Item Price
$1,561.20
$10.00 shipping to USA 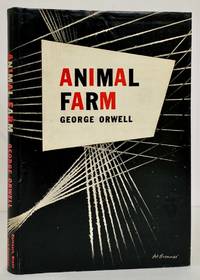 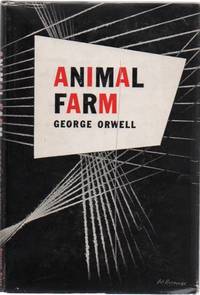 Description:
New York: Harcourt, Brace and Co, 1946. First U.S. edition. Hardcover. Hardcover. First U.S. edition. A fine book in a near fine dust jacket. Minor wear to the jacket extremities and light wear to head and foot of the dust jacket. Short closed tear at the top of the rear panel. All four corners of the flaps are clipped, but price of $1.75 clear present. First issue dust jacket with no mention of "Printed in the USA" on the rear panel.
Item Price
$1,250.00
$3.99 shipping to USA 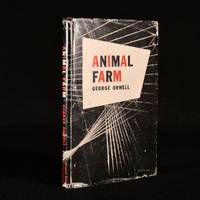 Description:
New York: Harcourt, Brace and Company, 1946. First edition. Cloth. Very Good Indeed/Good. 7.5" by 5". None. A first impression of the U.S. edition of George Orwell's groundbreaking satirical work, an important twentieth century novella. The first U.S. edition, first impression of this work, with 'First American Edition' and 'Printed in the United States of America' to the reverse of the title page, and the dust wrapper priced at $1.75 to the front flyleaf and without 'printed in the USA' statement to the rear wrap.In the original unclipped dust wrapper.George Orwell's monumental satirical allegorical novella. Set on a farm, Orwell looks at a group of farm animals who rebel against their human farmer, reflecting the events leading up to the 1917 Russian Revolution to the Stalinist era of the Soviet Union.Orwell wrote this controversial novella during the period of World War Two in which Britain was in alliance with the Soviet Union against the Nazis. Orwell was distinctly critical of Stalin, the… Read More
Item Price
$1,369.94$1,164.45
Save $205.49 !
$14.88 shipping to USA 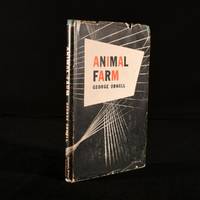 Description:
New York: Harcourt, Brace and Company, 1946. Cloth. Near Fine/Very Good. 7.5" by 5". None. An early American edition of George Orwell's controversial politically satirical novel, this edition being printed in the same year as the first American edition. In the original dustwrapper. Early American edition, published in the same year as the first American edition, this copy without the statement 'first American edition' to the copyright page. However, this copy does not state any other subsequently printings to the copyright page, so it's likely that this is the second printing.In the original unclipped dustwrapper. This is an early issue dustwrapper, without the price to the front flyleaf, and without 'printed in the USA' to the rear flyleaf.An early edition of George Orwell's monumental satirical allegorical novella. Set on a farm, Orwell looks at a group of farm animals who rebel against their human farmer, reflecting the events leading up to the 1917 Russian Revolution to the Stalinist era of the… Read More
Item Price
$1,369.94$1,164.45
Save $205.49 !
$14.88 shipping to USA 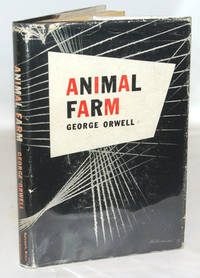 Description:
New York: Harcourt, Brace and Company, (1946). First Edition. First Printing Near fine in black cloth covered boards with gilt text on the spine. A 12mo of 75/16 by 4 7/8 inches with two tiny specs of white near the heel of the spine and three tiny white specks on the rear board near the head of the spine. In a very good, price clipped dust jacket with 1/4 inch deep chips at the upper edge of the spine area and three closed tears on the upper edges of the front and rear panels and heavy rubbing to the edges of the front panel and spine areas. 118 pages of text. The "first American edition" of Orwell's famous allegory of Soviet era totalitarianism under Stalin.
Item Price
$1,000.00
$4.00 shipping to USA 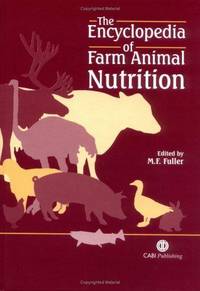 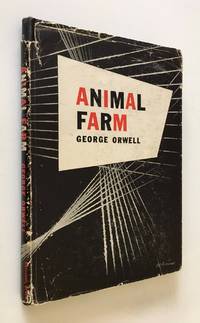 Description:
1954. First Edition thus. Stiff Wrappers. Near Fine+. Uncommon edition of the world's most famous modern animal fable and political allegory. Oblong 8vo (164 x 240mm): [28]pp, with 52 cartoon strips. Grey illustrated wrappers printed in black, staple-bound. Light stain to top left corner of upper wrapper, else an excellent example, tightly bound and clean throughout. Fenwick (A.10.M1) mentions, in passing, the strip cartoon version serialized by British and American newspapers but not this publication. Shortly after Orwell's death, his widow Sonia was visited in London by representatives of the American producer Louis de Rochemont, seeking movie rights to Orwell's novel. A conventional live-action adaptation was out of the question, of course, given that the book's main characters were farmyard animals, so De Rochemont hired the British husband-and-wife animators┬ĀJohn Halas and Joy Batchelor, who had produced propaganda films during the Second World War. Their adaptation of┬ĀAnimal Farm┬Āwas… Read More
Item Price
$865.00
$5.00 shipping to USA

Try adding this search to your want list. Millions of books are added to our site everyday and when we find one that matches your search, weŌĆÖll send you an e-mail. Best of all, itŌĆÖs free.

Join the Bibliophile's Club and save 10% on every purchase, every day ŌĆö up to $25 savings per order!