Obituary: Book dealer Hamish Riley-Smith (1941-2020), as published in The Antique Trade Gazette
Rare book specialist Hamish Riley-Smith, who died on August 10, did not originally intend to become a dealer.
He went to Trinity College Dublin, where he read economics and met our mother Brigitta (Gita) von Wagner. He planned to work in the family brewing business, John Smith's, and spent seven years learning the craft at Whitbread's. But after all the family interest in John Smith's was sold in 1972, he looked for a new career.
In 1974 he started Hamish Riley-Smith Rare Books. He had no formal training in the book business, other than an acute awareness of business and a degree in economics. He started, in his own words, as a runner, taking one book to another dealer and making a small margin.
Hamish quickly realised this was not for him and started to focus on Arabic and economic books and the social sciences. Through knowledge and research he built up a strong and friendly working relationship with the Japanese, travelling to Japan often. He also traded in Arabia, the US and Europe.
Sacks of catalogues
We can remember how sacks of catalogues would leave the house and go off to museums and institutions across the world, and answers would come back via telex. This was a world before the internet, mobile phones and faxes and computers were only just coming in.
Among his proudest sales were the 14th century Qur'an manuscript of Mameluk Sultan Al Malik Al Nasir Muhammad (pictured here); The Papers of Sir Roy Harrod; The library of Sir John Hicks; The Betjeman Library; typescript/manuscript of Ludwig Wittgenstein's Tractus Logico Philosophicus; The Felibriges Library of Musée Theodore Aubanel, Avignon; as well as collections of Isaac Newton; John Locke; Thomas Hobbes; Shakespeare; William Petty; Robert Owen and Adam Smith.
He was resolute in his independence and had many friends and colleagues in the book business, but he never did a book fair ("I am not a book fairy") and refused to join any trade associations.
He will be remembered by the family as a loving husband, father and grandfather, and a great source of fun and interest; for Hamish, above all, family came first. His business will continue to be run by his wife Gita and two sons, Damian, director of Paragraph Publishing, and Crispian, director of Crispian Riley-Smith Fine Arts Ltd.
Biblio Member Since
2014 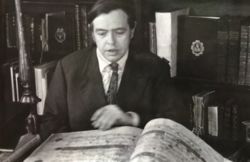