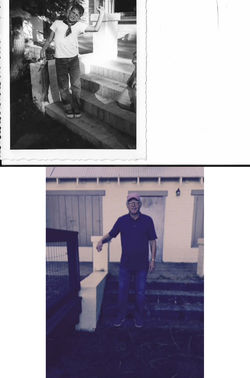 Bruce Cave Fine Books specializes in quality fishing books – particularly fly fishing for trout, steelhead, Pacific and Atlantic salmon, striped, black, and smallmouth bass plus any other fish that’ll eat a well-dressed fly; fresh and salt water fishing anywhere on the planet, ranging from picky rainbows in the North Fork of the Feather River near Chester in Northern California to five hundred pound river monsters at Cao Lh in the Mekong Delta. That’s me in the top photo at age 10 in 1957 on the steps of our now gone cabin at Prattville on the west shore of Lake Almanor (it was elegant) – I’m holding the largest trout I’ve ever caught (seven pounds), and needed my grandfather’s helping hand to do it; that fish caught my imagination. And that’s me in the second photo taken in late October 2014 on the same cabin steps, 57 years later, holding an imaginary fish. Between the intervening years I realized that reading about fishing could be nearly as good as fishing itself. I also came to know that fly fishing can be a metaphor for life; there are those moments in fishing that require neither stream nor fish, and sometimes the least important thing about fly fishing is the fishing. Now it’s catch and release for the most part – time spent in rivers and lakes together with age encourages it. Fly fishing is timeless; fishermen aren’t. I think Robert Traver had it right: I fish ‘because maybe one day I will catch a mermaid’; and I ‘don’t regard fishing as being so terribly important but because I suspect that so many of the other concerns of men are equally unimportant - and not nearly so much fun.' A life of fly fishing is beautiful and simple. I’m always interested in purchasing good books, booklets, pamphlets, catalogues, brochures and other ephemera on these subjects and encourage you to either email me at brucecave@comcast.net or telephone 916.728.5019. Sincerely, Bruce Cave.