Books Revisited is an independent bookstore located in central Minnesota. We have two retail stores specializing in used and out of print books. We are obsessed with quality, and go to great lengths to accurately describe the book we offer to our online customers.

Although I have been a lifelong book collector, I only began selling books and antiques online in 2016 for my mother in order to profitably sell items from her late sister's estate. It was during this time I discovered my passion for selling books as well as collecting them and have expanded my stock to include
several books from my personal collection as well as newly acquired items.

I only sell items in the condition I'd keep in my own collection, and often list items at a lower grade than they are in reality to avoid disagreements or disputes over quality. I try my best to include photos of the exact items I'm selling and exact descriptions of defects. If you have any questions about my listings or shipping policies, feel free to contact me! 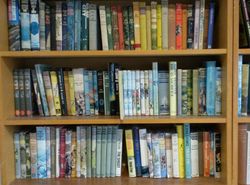 A home-based business trading successfully for a number of years. New Zealand proves a valuable source for collectable books.

(From the History of Rowe)The story has it that a man from Boston, in trying to hide out from his wife, came to a beautiful place by a river in Western Massachusetts. He thought this was the end of the earth and his wife would not find him here. He named this place Zoar because it was mentioned in the Bible and it was the last letter in the alphabet. It was the last place in the world where she would look. We are a general used book store located on the banks of the beautiful Deerfield River in Charlemont, MA. You can reach the store by coming north or south on Route 91. Take exit 26 to Rt.2W. Follow Rt.2W for about 18 miles. You will pass through the center of Charlemont. Keep going west through 2 \"S\" curves. At the end of the second \"S\" curve you will come to bridge with an indian head on it. Take the right turn just before the bridge (Zoar Road) and go 2 miles. After you pass a big grey wall on the right you will see a house on the left right after the wall. It\'s a White house with a red barn. Store hours: Wed.-Thurs.(10:00 a.m. to 5:00 p.m.) Fri.-Sun. (10:00 a.m. to 6:00 p.m.) Closed for the Winter (November 1st to April 15th)