Description:
Paris: Librairie Vanier, 1886   ¶ FIRST EDITION of Verlaine's biographical sketch of Barbey d'Aurevilly, novelist and critic, the author of Les diaboliques (1874) and other light classics. Verlaine's essay is enlivened here by a wonderful full-page caricature of Barbey striking an imperious pose as he jabs his palm with his own pen, perhaps a hint of his extreme Catholicism. His foppish boots sprout needlelike spurs; and the names of his books spill out from a tipped bottle of 'encre du lion'. (The latter recalls the use of the word 'lion' in French as near-synonym for the word 'dandy', eg in Baudelaire "Le peintre de la vie moderne" ix: "Que ces hommes se fassent nommer raffinés, incroyables, beaux, lions ou dandies, tous sont issus d'une même origine". For this suggestion we are indebted to Mr David Cocksey of the University of Sheffield.)  (Series: Les hommes d'aujourd'hui, no. 282.)   ¶ It was Barbey, incidentally,… Read More
Item Price
$220.00
$3.50 shipping to USA

Description:
New York &c, 1941 *** Three unused bookplates of THE PREEMINENT COLLECTOR OF AMERICAN LITERATURE; as follow: (1) 98 x 70 mm, lettered "This is the / Book Plate / of / Clifton Waller Barrett / 1941" with a figure of a ship and four lines from Longfellow, printed in black on machine-made laid paper unmarked, gummed verso along the top-edge only; (2) 102 x 76 mm, lettered "Hic Fructus Virtutis / Clifton Waller Barrett" with arms as illustrated, printed in black with colors and silver on machine-made off-white wove paper unmarked, not gummed; (3) 101 x 76 mm, lettered as no. 2 above with arms as illustrated, printed in black with colors and silver-gray on machine-made white wove paper unmarked, not gummed. The figure of a ship on Barrett's first bookplate presumably alludes to his career as founder and president 1932-54 of the North Atlantic and Gulf Steamship Company, of New York: Barrett is said to have remarked once that "For a business career I chose shipping. For my real… Read More
Item Price
$120.00
$3.50 shipping to USA

Description:
Chaumont (Haute-Marne): widow Bouchard, 1803     ¶  ONLY EDITION; comprising one hundred fables in French verse, chiefly original but one translated from Phaedrus; together with a charming dedication to the author's wife and a short verse Prologue and Epilogue. The text is arranged in five books of twenty fables each; and many of these have subtitles serving as promythia, eg "Le deux chenes; ou, L'orgueil puni" (The two oak-trees; or, Arrogance punished). A nice epigraph from Diderot adorns the titlepage: "Les Fables sont devenues la nourriture et les délices des esprits les plus délicats, le plus cultives, les plus profunds."  Of Bazinbois himself almost nothing is known. In 1787 he published a volume of Fables nouvelles . . . ; suivies d'un Traite sur la bienfaisance, under a (false) London imprint: Only one edition of this is known; and copies are preserved at Paris, Nancy, and Poitiers. From footnotes in the… Read More
Item Price
$1,300.00
$3.50 shipping to USA

Description:
Paris: Cosson & co (Paris), for Elie Gauguet, 1860 In 12s and 6s (184 x 118 mm untrimmed): Pp [i-iv] [1] 2-296. Title within a fine wood-engraved architectural border incorporating birds, grapes, a serpent, and a fox, its base lettered 'Esope La Fontaine Phedre', after Louis Browne by I. Bichon(?). Six wood-engraved plates signed with monogram BJL (3) or unsigned (3), by I. Bichon(?) (4) or unsigned (2). Publisher's printed blue wrappers (the upper wrapper reproducing the titlepage, advertisements on the lower wrapper, spine priced 3 francs), plain tissue pastedowns. Partly unopened, sellotape on spine, withal a very good copy. *** THIRD EDITION, ENLARGED, and the earliest edition known in America; comprising 150 FABLES IN FRENCH VERSE, arranged in six books of twenty-five fables each; together with a general prologue, special prologues for books iii and v, and general epilogue, all in verse. An alphabetical index at the end distinguishes Bourguin's original fables -- of which there are… Read More
Item Price
$825.00
$3.50 shipping to USA

Description:
New York: Southern Music publishing company inc, for Peer international corporation, , 1942 305 x 232 mm: Three leaves, paginated [1-2] 3-5 [6]. Piano-vocal score with guitar-chord diagrams; plate-mark "Little Bo Peep 3" on pages 4 and 5. Pictorial self-wrappers, large naive vignette (Pvt Jackson in a jeep tipping his helmet to Bo-Peep, unsigned) printed in blue and vermilion on the upper wrapper (page [1]), advertisements for songs by Fats Waller and Hoagy Carmichael on pages [2] and [6]. First edition. A very good copy. *** FIRST EDITION; and probably THE FIRST SEPARATELY PRINTED TEXT CELEBRATING THE JEEP AS AN ELEMENT OF POPULAR CULTURE. Indeed the present composition may be dated before 30 March 1942, when Horace Heidt's Musical Knights recorded it on the Columbia Microphone label (matrix HCO771, catalogue no. 36568). The song was performed by Spike Jones on the Kraft music hall radio program on 16 April 1942. It was performed too by The Korn Kobblers 1942-43, and included in The Korn… Read More
Item Price
$120.00
$3.50 shipping to USA 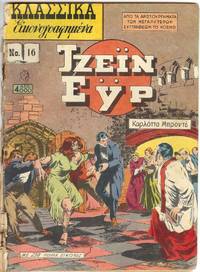 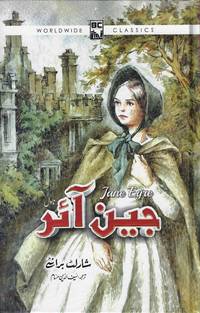 Description:
¶ First typographical edition of the first 'Jane Eyre' in Urdu; one of 1000 copies. Inscribed by the publisher Amar Shahid.
Item Price
$250.00
$3.50 shipping to USA