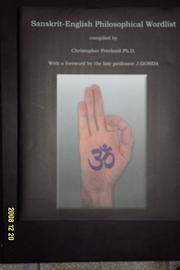 Description:
Chiang Mai: Self, 2007. Hardcover. New/new. A compendium with about three thousand five hundred terms compiled in order to help in the study of Indian philosophy, which logically enough refers to terms employed by both Hindu and Buddhist philosophical systems, as well as some mythological references. There is a definite bias towards non-dualistic thought in the interpretation of the terms. Entries are in Devanagari script with a romanised transliteration, where possible the Sanskrit root word has been included with the entry to satisfy curiosity or aid further investigation. For etymologists concerned by historical setting, textual reference is often provided in which the expression appears and thus the time of its use can perhaps then be deduced. Foreword by Professor J.Gonda of Utrecht University.
Item Price
$56.08
$17.90 shipping to USA