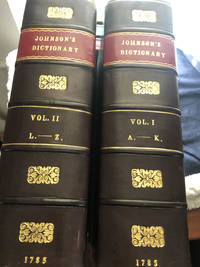 Description:
The last edition to be edited by Johnson himself, presented is Sixth Edition of Samuel Johnson's "most amazing, enduring and endearing one-man feat in the field of lexicography… The preface ranks among Johnson's finest writings… It is the dictionary itself which justifies Noah Webster's statement that 'Johnson's writings had, in philology, the effect which Newton's discoveries had in mathematics" (PMM 201). Published shortly after Johnson's death (Dec 13, 1784), this edition contains many revisions Johnson had planned after the Fourth Edition (1773). Too, it is the first edition to carry Dr. Johnson's portrait. No missing pages, text generally fresh, usual foxing and a neat previous owner's signature. Handsomely bound in calf and printed cloth. $1000. We specialize in rare Ayn Rand, history, and science.
Item Price
$1,000.00
$3.00 shipping to USA 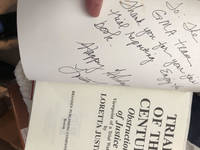 Description:
SIGNED and Inscribed to the staff of Good Morning America after a TV interview with the author, this is a fine, unread copy of the author's defense of OJ Simpson, claiming that only white racism led to his arrest and prosecution. A Fine copy with a slight bend in glossy wraps. Book #C5b114. $33. We specialize in Rare Ayn Rand, history, and science.
Item Price
$33.00
$3.00 shipping to USA