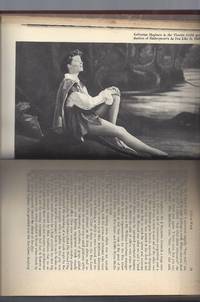 Description:
Lawrence Langner (May 30, 1890 ā 1962) was a playwright, author, and producer who also pursued a career as a patent attorney. Born near Swansea, South Wales and working most of his life in the United States, he started his career as one of the founders of the Washington Square Players troupe in 1914. In 1919 he founded the Theatre Guild, where he supervised over 200 productions. He was also founder and Chairman of the American Shakespeare Festival, and with his wife, Armina Marshall, he created and operated the Westport Country Playhouse. Besides theatre, Lawrence Langner wrote several books, including an autobiography, titled The Magic Curtain. He was awarded the 1958 Tony Award for best play production (together with his wife and partners, Theresa Helburn and Dore Schary) for Sunrise at Campobello. (Wikipedia) Numerous photos, early Katherine Hepburn and many others. 8vo, 498 pp. No dust jacket, some sunning to the spine. Stated First edition.
Item Price
$15.00
$4.50 shipping to USA 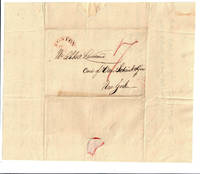 Description:
Abbott Lawrence (1792-1855) and Amos Lawrence (1786-1852); 25 items of receipts and one letter from the period of 1816-1820 where Abbott Lawrence traveled to England and purchased many items. A letter of correspondence between Amos Lawrence to Abbott instructing him about a particular transaction and also referring other contacts to him. Mentioning also the problem with 'Southern paperā¦.that must be greatly discountedā¦' telling of the huge disparity in currencies between the North and the South. Lightly toned, some stains and some loss of paper on various items but all legible and in good condition. A rare look into the 19th century buying habits.Amos Lawrence (1786-1852), also born in Groton, established (1807) in Boston a mercantile firm, and he headed that firm until (1831) and made it into one of the largest mercantile firms in the United States; Amos was also well known for his charitable gifts. Another brother Abbott Lawrence (1792-1855), also born in Groton, was in partnership with Amos… Read more
Item Price
$650.00
$4.50 shipping to USA 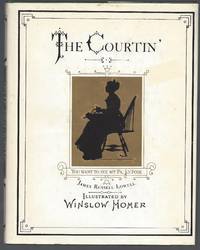 Description:
Hand colored woodblock prints (28) bound in vellum with gold lettering on the spine. The title is 'The Passion of Augsburg of 1480' huftau Kiepenheuer Verlag- Potsdam (1924). Page previous to title page states: 'The old picture book published by Kurt Pfister. Second Printing. In pencil on fly cover page it states: 'of an ED Limited to 300 copies This is one of 100 copies bound in full limp vellum.'. On the next to the last page is printed fly: 'Dieserzmeite pressure de series "The old picture book" was subtracted from the Hobten = Press, Berlin, in the Liturgical on Wiek Zander = butts by hand. The Aekungen produced F. Bruckmann A = B., Munchen. The handkolorieren worried Hermann Silmar, Berlin. The softcover were bound by the procedure of FH Ehmcke, Munchen, of Otto Dorfner, Weimar, with his hand. No. 1-50 place in Schweinsleder, no. 15-150 151-300 bound in cardboard in vellum (calf vellum), no.. This book carries the number: 139. Title: The Augsburger passion of 1480. Author (s): Luther, Martin ,;… Read more
Item Price
$200.00
$4.50 shipping to USA