Description:
Paris: Fils dEmile Deyrolle, nd [ca. 1910]. Original first printing. 25 1/8 x 34. Photomechanical print (poster). Black and white. Mounted on linen backed paper (size: 96 x 72 cm). Near fine. The Spanish language version of one of many in a French series on the dangers of alcohol. It would have most likely appeared in a school or public place at the time of its printing. The upper half shows what can happen to the private life of individuals who drinks. The main image is of a man grabbing his wife by the hair, his other arm raised to strike her with a bottle, while their infant sleeps in a cradle in the same room. An insert to the left shows a woman carrying a bundle of her belongings up a hill and an insert on the right shows a couple with two small children at a bank teller's window trying to get a loan. The lower image shows people drunk in public and shows how it can effect their dignity. One man is being supported by a soldier, and a woman is slouched in a chair with a bottle of wine.… Read More
Item Price
$700.00
$3.00 shipping to USA

Description:
New York: Key Stone Press Agency, 1971. 6 x 8” original single weight silver gelatin photograph of the Author, Jamie Mandelkau (left) and President Buttons (Peter Welsh on right) in the Covent Garden. With stamp of New York Keystone Press Agency on the verso along with a taped, typed summary of photo. Near fine. This photo was taken at a reception at the Middle Earth Club in Covent Garden, London to celebrate the publishing of Mandelkau’s book, “Buttons: The Making of a President.” This is the story of Peter Welsh – President Buttons of the London Chapter, Hells Angels.
Item Price
$90.00
$3.00 shipping to USA

Description:
Worthing: United Kingdom, [1993]. 16 x 23 1 2” White poster paper with blue word boxes. Schedule of events for Friday, July 16th through August 7th. Sterns was a nightclub located in West Sussex. It was a rare example of an early UK club boasting 4 separate rooms with DJs playing Rave, Breakbeat hardcore, Jungle music, Techno, Progressive House, Hard House, and Garage. Stern’s was credited by a number of artists on their record sleeves, as one of the most well known Rave/Hardcore clubs in Europe. In 1992 attention to the Rave Scene and bad press contributed to In-Ter- Dance and Sterns all night license being revoked. Sterns opened its doors for the last time on 14th August 1993.
Item Price
$150.00
$3.00 shipping to USA 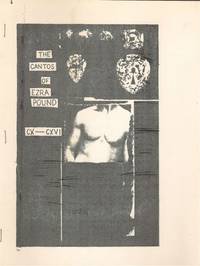 Description:
New York: Fuck You Press, 1967. First edition. Cover by Joe Brainard. Quarto. Mimeographed sheets, printed rectos only, in stapled illustrated wrappers. Crease to corner of cover and first sheet, else fine. This is the first edition and pirated version of Pound’s final cantos, which forced into publication the official, authorized version. Limited to 300 copies.
Item Price
$120.00
$3.00 shipping to USA

Description:
[San Francisco]: Grabhorn Press, [1964]. Issued by David Magee Book Shop, announcing his move from Post Street to Cow Hollow. 12.0” x 9.0” Large folded sheet with an engraving for “A True Copy...for the Tryal of K. Charles I...” (London, 1684) tipped to the front cover. Magee describes his new place as one of “informality . . . the Magees plan to be so informal there will be times when they will not be there at all.” Handsomely printed by the Grabhorn Press. Fine in the original mailing envelope. A scarce piece of Grabhorn ephemera.
Item Price
$225.00
$3.00 shipping to USA

Description:
First edition, newsprint. 8 3 4 x 11 1 2” 9. Opens to 11 1 2 x 17 1 2” [8 pp]. Light sunning to extremeties, else near fine. Black type with b/w photos and illustrations of prisons and prison riots. Describes the perceived prejudices which the courts and prisons of the United States express towards the poor (i.e. powerless). Discusses Attica and lists the 28 Attica Demands. Back page has photo of a Klansman and a burning cross.
Item Price
$150.00
$3.00 shipping to USA